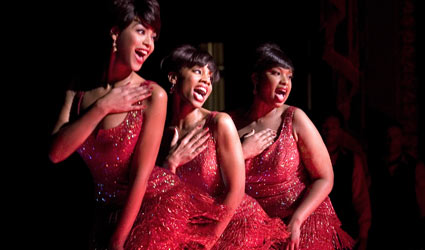 
Jamie Foxx, Beyonce Knowles, and a rejuvenated (live-action) Eddie Murphy topline Bill Condon's exuberant movie musical Dreamgirls, but a newcomer in Jennifer Hudson makes it more stirring and heartfelt than a Motown soap opera with drastic transitions on and off stage.

The late Michael Bennett's 1981 musical was a vibrant look at family, race within rhythm and blues during the volatile 60's and 70's. Condon, writer of the crisper Chicago and director of the involving Kinsey, here excels more as director than realizing narrative coherence amid some surprising, stunning performances.

The script arguably has something in common with the Supremes and a little with Lady Sings the Blues. The slick, smarmy Detroit car salesman played by Jamie Foxx (Ray, Miami Vice), Curtis Taylor could be modeled after Motown bigwig Berry Gordy. Curtis is a car salesman who finds his real vocation in managing performing artists.

The Aretha Franklin voicings of the heavy-set Effie (Hudson), lead singer of the Dreams, isn't what Curtis will think will sell to the mainstream. Back-up singer from the Detroit projects, Deena Jones (Beyonce from The Pink Panther) who's thinner and prettier is where the appeal lies as Condon cogently works in the civil rights movement to the shock of characters like Effie.

Curtis has Deena on his mind as sex comes with the money, not what he wants in the more opinionated diva in Effie. The story fills in the group's rise as a talent contest has them, who include a third in the comely, talented Lorrell (Anika Noni Rose), becoming the backup for Jimmy Early, done with soulful self-destruction by Eddie Murphy.

"Cadillac Car" is the song, written by Effie's brother, C.C. White (Keith Robinson), helps get them noticed until a white artist sappily covers it to Top 40 status. Curtis senses success in shifting Jimmy and the Dreams into something more malleable for Hollywood and scoring on the pop charts. Deena becomes a slave-like spouse of Curtis with Hollywood aspirations of her own (see an offer with a producer looking like a long-haired John Lithgow) as Lorrell and Effie's replacement, Michelle (Sharon Leal) look to reap the rewards. Yet, what is Curtis's meal ticket is the stuff of desperation for Jimmy and Effie.

As the Motown throttle is muted a bit by the Broadway interpretation, Beyonce and Foxx, respectively groove with gravity and magnetism as the foibles of their characters are felt. More interesting is Murphy in a risky part about a falling star, and he pulls it off from the edgy, cocky persona of the character used to using women and drugs, and the fear of losing it all. Some may like the pungent sensibilities that belies his standup heights and his glory days over 20 years ago on "Saturday Night Live".

"American Idol" runner-up Hudson amazingly embodies the spirit of Jennifer Holliday who originated the part on Broadway especially in the thrilling, memorable song, "And I Am Telling You I'm Not Going." It's a sassy, heartbreaking performance that completes the movie and never seems forced or overwrought. Unlike last year's film version of Rent which churned too much from its reverence to dramatizing the era which introduced HIV and AZT.

Still, the multi-tasking Condon manages to hold on fervently to themes of greed and equality within an unforgiving industry, allowing for Motown razzle-dazzle from costuming of Sharen Davis and vibrant lensing from Tobias A. Schliessler. Dedicated to Bennett, Dreamgirls truthfully beats to black artists who would help define the hip-hop and "American Idol" experience.