Drag Me to Hell 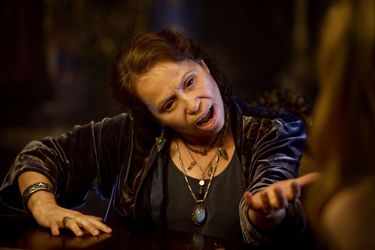 
At turns unnerving, funny, and campy, Drag Me To Hell is a welcome return of true horror for genre fans.

Similar to his hugely profitable Spider-Man franchise, Raimi's embracing of his former horror and comedic days plays like a modern parable where an average person is thrust into something threatening that gradually brings out something extraordinary in them.

Lohman's Christine Brown is a rising Pasadena loan officer, and her situation is a viable one given the current unsettled political and economic climate.

Before the opening credits roll, in 1969 a young boy snatches a bracelet from a gypsy. Now, Christine, in the present day, who has the same job as Jim Carrey did in Yes Man, makes a tough decision supposedly on the way to getting an assistant bank manager position. Her refusal to help an elderly woman, the gypsy-like, Eastern European sounding Mrs. Ganush (Raver), behind on her mortgage payments, leads to trouble after the humiliated old lady is dispossessed of her home.

The neat title comes into play after Mrs. Ganush places the demonic Larnia (from Greek lore as a goddess transformed into an ogre or centaur dragging its screaming victims into damnation) into her life, a kind of alternate one to what she's familiar with. "For the first three days the spirit torments his victims. After that it will come to take you to hell to burn for eternity."

Part of the scary, crazy fun concocted by Sam and Ivan includes Christine's car overcome by a stranger, then a bloody nose, as well as torture from daydreams and nightmares. This haunting by an evil spirit leads to a love story of sacrifice. Christine needs the psychic aid of Rham Jas (Dileep Rao) and the presence of skeptical appealing boyfriend Clay (Justin Long) on the way to reverse this shattered, creepy, taunting existence.

As Raimi ratchets up the tension, Christine must face the sinister forces as her trespasses (which involve Clay) have brought on calamitous consequences. Lohman, who is in nearly every scene, is an ideal portal of panic and desperation for the viewer easily pulled this house of horrors experience.

Effective backup comes from David Paymer as Christine's boss, the rational Long, and the eerie, unravishing Raver as this well above-average horror thriller runs wild in scenes that feature dentures, a handkerchief, and a stapler. Originally entitled "The Curse", Drag Me To Hell has Raimi in top form with his visual effects and makeup artists to create a lot from fear and superstition to often humorous and disturbing effect.