Down to the Bone 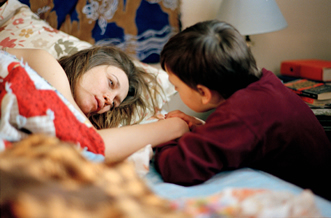 
This drama about addiction carries the same vibe as The Woodsman as despair is quietly prevalent in Down to the Bone.

Like Kevin Bacon, relative newcomer Vera Farmiga (whose visibility will rise much this year thanks to the likes of Martin Scorsese) brings much introspective authenticity to self-destructive behavior arising from heavy use of cocaine.

Director and co-writer Debra Granik has a strong feel for Farmiga's Irene, an upstate New York grocery store check-out clerk with a husband and two sons. This loving mother will sate her needs with a check made out to one of her kids as a birthday gift. Her degrading life is scene in preparations for Halloween, and symbolic of a plastic tarp covering plans for an addition of a second bathroom.

Ambient sounds replace a score or cues to illuminate the existence of a drug user, an example of Granik's documentary-like realism without adding much to something often depicted. With scribe Richard Lieske, she has made something harrowing and hypnotic from her acclaimed dramatic short film on the same subject.

Filming occurred at a time when tattered flags flapped from cars and "Keeping America Safe" was on grocery store plastic and brown bags. The wintry conditions of Ulster County are palpable, as well as working-class life.

Around the blackened snow, there are no big emotional explosions when it comes to Irene's self-deprecation. Farmiga is most persuasive and riveting without dialogue as Irene will leave drug rehab rather soon to return to a dreary life. Her son wants a golden snake and her faithful, but user husband (Clint Jordan) is interested in home improvement.

Based on a story of a cleaning woman, Down to the Bone gets to the core of falling hard and harsh mishaps and relationships in the face of cleaning oneself up. Potent support is provided by Hugh Dillon as a male nurse and recovering junkie who loves Irene. But, Farmiga uses more than "tools" as technique to stretch to make the portrait quite memorable within a visual palette of high-definition video and people who feel more fulfilled with piercings and tatoos.