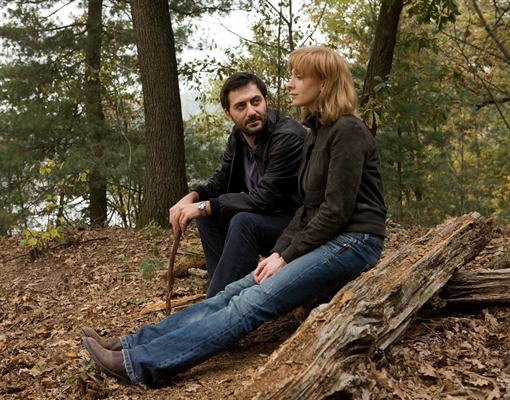 
An Italian import of a genre hybrid may remind discerning viewers of films like The Vanishing and Mulholland Drive. The Double Hour manages to keep one off-course, but often in a mesmerizing way.

Tyro helmer Giuseppe Capotondi gets the most out of his leading, classically trained actress Kseniya Rappoport whose Sonia definitely seems beset by grief and a troubled past at the outset. The chambermaid, a Slovenian immigrant learning Spanish, toils at a hotel with colleague and friend Margheritte who wants her to be more socially active.

Set around the Turin speed-dating scene, a melodramatic thriller takes hold through Sonia's relations with a down-on-his-luck former cop and security guard Guido, a decent Filippo Timi, at the event.

When they enjoy each other at a mansion where Guido provide his services, their picnic is disrupted by thieves who use deadly violence after one of them lewdly advances on Sonia.

At this point, Capotondi, known for his high-profiled work in music videos and in magazines, allows for Rappoport to really lose herself in a meaty role. He even gets some use out of Far East horror tropes as Sonia attempts a soothing bath (some might remember a scene in What Lies Beneath with Michelle Pfeiffer).

The plot's major shift comes in the latter half as someone coping with sudden loss and unnerving phone calls has a reawakening, especially when a couple of visitors arrive. The Double Hour alludes to its meaning through Guido mentioning how the hands of time (hours, minutes) can be the same and the right moment to make a wish.

One can feel the elements of a whodunit through suspicion of the authorities as represented by Dante, a dogged Michele Di Mauro. For some, the overly discursive nature of the storyline may not be enough of an advantage as the coda has somewhat of a bittersweet bad taste to it. Yet, the filmmaking and the aura of the Sonia/Guido dynamic elevates what uses emotion and apprehension as well as possible without much explanation.