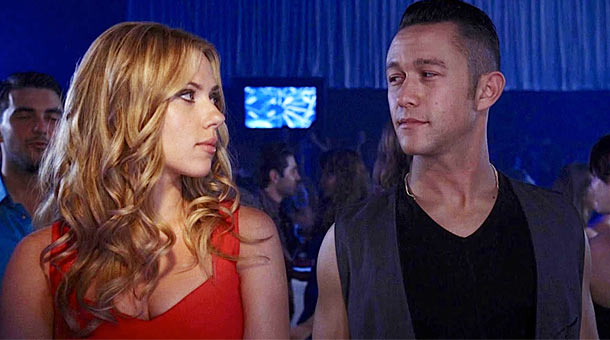 His Don Jon proves the tyro helmer and writer is very actor-friendly in confronting a touchy topic for the digital age.

Gordon-Levitt, who has done very well for himself since a child actor opposite Danny Glover and through and beyond effective indies like Brick and Mysterious Skin, knows there are challenges when it comes to embracing material wrapped around sexual compulsion and self-gratification. The Jersey Shore Guido of a character he plays, Jon Martello, makes regular confessions, receiving his share of "Our Fathers" and "Hail Marys". For all of his real-life conquests (countless ladies nabbed at the night-club) nothing quite lives up to the fantasies that he happily laps up on his lap-top.

A tale of romance, obsession, and redemption hinges on old-fashioned Barbara Sugarman (Scarlett Johansson of The Avengers and Match Point) drawn to Hollywood's cinematic Golden Age, tough on the Lothario, enough so to provide a challenge to just reveling in lots of kinky clips stockpiled on his hard drive. Jon's standard pick-up lines don't have the same effect on a sassy, self-absorbed, even encouraging like getting that elusive college degree.

A lighter mood (with scenes that will have many of the targeted demographic in stitches) is established in ways reminiscent of 50/50 to cut between the delusional fellow's milieu of experiences which include trimmed explicit scenes (as the original title included addiction with a kind of frantic verve perhaps too obnoxiously revealing what feeds his brain. The cycle conditioned by Jon has a visual dynamism not far removed from Darren Aronofsky's pupil dilation in the controversial, wrenching drug opus, Requiem of a Dream. The distaff side may not take Jon's character and the film's explosive disturbing predatory predilections well at all. Yet, it's to his credit that a stereotype like Jon who might be considered a cousin to John Travolta's Tony Manero (whose disco dancing took him down a dark road).

The gratuitousness that envelops Jon isn't part of a heavy-handed statement by the young, promising auteur, as his themes connect in ways similarly to a more dramatically resonant, pretentious effort like Steve McQueen's Shame did. An affecting, complex role made his own by Gordon-Levitt revolves around female objectification with serious and satirical flair exudes confidence even if isn't met behind the camera when it comes to a smoother, structural rhythm. Still, as a contemporary examination of the influence of sex on relationships, the treatment of the material especially in the latter going has some unexpected emotional undertow.

Even a lesser known film like The Shape of Things can be akin to the pressures to confront attitudes and behaviors so rudely depicted head-on. In a way it's a battle of the sexes with palpably amusing support from Tony Danza and Brie Larson on Jon's family side to Johansson's prim and prime rejector that offers color and complexity. And, Julianne Moore, as the middle-aged Esther whom Jon meets while trying to further his education, gains more traction in the latter's gradual way up the learning curve. As off-putting as Don Jon can be in a hard-core way a very testosterone-fueled, raw realism in penetrating febrile fashion can still reach an honestly felt climax and resolution.