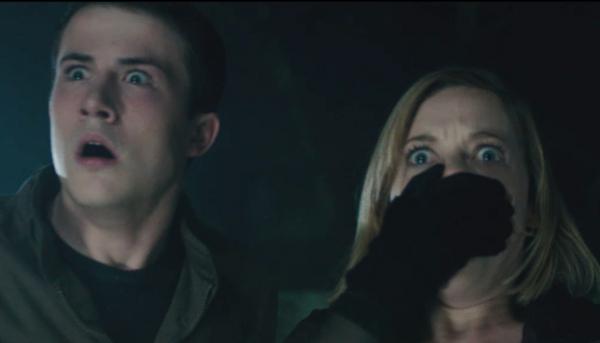 
Don't Breathe is a survival horror movie directed by Fede Alvarez.  When three friends, Rocky (Jane Levy), Alex (Dylan Minnette) and Money (Daniel Zovatto) attempt to rob a a blind army veteran (Stephan Lang) of his money they soon find out they are in over their heads when he begins hunting them down in his home.

This movie had some things good going for it.  Mainly Stephan Lang's performance.  Despite being blind he managed to come off as very intimidating and overpowering despite the fact that he couldn't see.  Everyone else acted competently enough to not garner any real complaints.  The atmosphere was good as well.  The movie took place inside the blind man's home and the movie was shot in a way that made you fear every corner.

That being said, this movie has some very serious flaws that are pretty game breaking.  Despite decent acting, the main characters were absolutely despicable.  The plot seemed to only exist to justify the fact that they were about to an innocent blind man.  Sure, the movie would later paint a different picture of the blind man but it still doesn't justify me wanting them to survive.  The beginning of the movie shows that our 3 main "protagonists" steal from people all the time.  The excuse is that Rocky needs enough money so she can escape with her sister from her terrible mother and her boyfriend.  This, isn't a good enough reason and feels pretty forced.  In fact with all this, this may be the first time I've seen a movie where I actually wanted the "protagonists" to die.

Overall despite some decent acting and some good scares, Don't Breathe is a movie only worth seeing if you're a true horror fan.  But even then, you may find trouble enjoying the film when you find yourself rooting for the "bad guy" of the film.