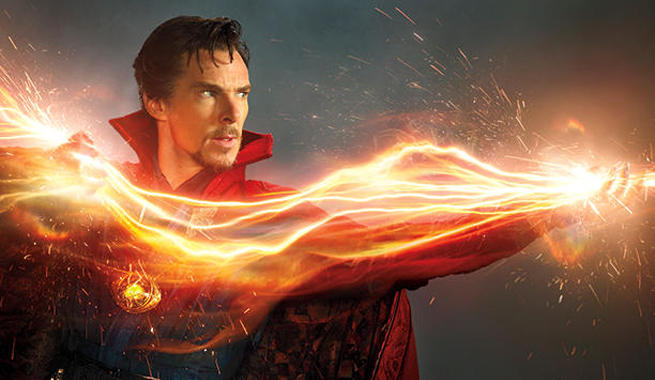 
Doctor Strange is the newest addition to the Marvel Cinematic Universe.  However, out of all the films that have been brought under this banner, Doctor Strange has to be the most unique one so far.  The film follows Dr. Stephen Strange (Benedict Cumberbatch), a well know and very talented surgeon who has everything going for him.  However, when a car accident leaves him with permanent nerve damage to his hands Strange goes on a journey to find a way to heal himself and regain the life he had.  Along his journey he comes across a man named Mordo (Chiwetel Ejiofor) who introduces him to The Ancient One (Tilda Swinton) who turns Strange's world upside down by introducing him to what is essentially magic.

When I was first introduced to this movie I was hesitant.  This was a large departure for Marvel and I wasn't sure if they were going to pull it off.  However, this movie turned out to be very good.  Benedict Cumberbatch shines as the slightly arrogant and self centered Dr.  Tilda Swinton also stands out as her role as ancient teacher.  And the last standout for me was Mads Mikkelsen who plays the films lead antagonist.  That being said, there were no bad performances in the film.  These three just stood out the most.  The film also carried a fair amount of comedy, something that I was not excepting too much of when going into it.  That being said most of the humor is fairly dry.  However, with all this said the best thing about this film would have to be the visuals.  Doctor Strange seems to have taken inspiration from some of Inception's visuals as many of the action scenes and magic throughout the film are truly mind bending at times.  It was quite the sight to see as all this action taking place then suddenly the entire world is flipped upside down, and twisting and turning.

With that said, the only major complaint would, somewhat ironically, be the visuals.  In some very specific action scenes there was simply so much going on that it was literally drowning out its own action, which was very distracting.  Luckily this only really happened once in the film, but it just happened to be one of the larger action sequences int the film.  But it doesn't take too much away from the film.

All things said, Doctor Strange is a excellent installment into the Marvel Cinematic Universe, and an excellent film in its own right.  Apart from some over crowded action scenes this movie is quite the sight to see.  I saw this film in 3d and I would highly recommend seeing it in that format as it really adds a good layer of depth into the visuals.  Even if you can't see it in 3d I would still recommend seeing it, especially if you're into comic book movies.