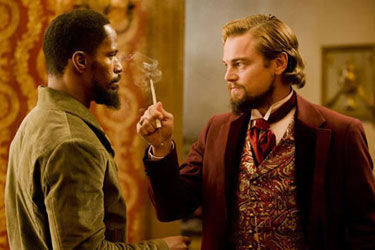 
Quentin Tarantino's love of the spaghetti-western, especially 1966s Django (employed in the opening theme) and his impressions of a surreal, agonizing  pre-Civil War South come through in a wild, audacious presentation which will be vying against Steven Spielberg's Lincoln for many of the same major awards this season.

Some may regard an excessive indulgence as outrageously sardonic with roiling racial intolerance into a hodgepodge (which finally includes sacrifice, camaraderie, and individualism as some of its issues) of what made masters like Sergio Leone and Mel Brooks excel as the filmmaking can quickly lighten things up after a harrowing torturous interlude.

An obsessive Dr. Schultz buys the freedom of Foxx's eponymous character, a slave with a wicked history with his former owners, who may be able to lead him to the murderous Brittle brothers for a considerable reward. Then, Django (pronounced without the "D" as in cameo with the aforementioned Sergio Corbucci film star Franco Nero) can be freed once the trio are captured alive or dead.

The sophisticated Waltz and a fine Foxx turn out to be a solid on-screen duo as the very skilled hunter in Django has quite a scent for slave owners. The long running time (maybe not enough for backstory and characterizations) pits an intricate scheme of the unlikely team against DiCaprio's plantation owner Calvin Candie where Django's wife Broomhilda (Kerry Washington, who played a wife of Foxx in Ray) is a slave in his "Candyland." A place where Candie boasts lethal "Mandingo" pugilism among the help.

Many non-Tarantino aficionados will not be comfortable with the "madness" of the times selectively used for silky satire and salty wit even for the eccentric strategy to relate to our contemporary world. If the plot apes too many revenge-minded Westerns there are enough contortions and acerbic, if verbose line-readings to stimulate at times explosively in the visceral machinations of the Kill Bill features without the acrobatic martial artistry.

The filmmaking of Django Unchained is accentuated by Robert Richardson's widescreen lush lensing mostly at Gene Autry's renowned Melody Ranch to represent a diversity of mood and character. Much blood is drawn and not just in the scene where Candie inadvertently cuts his hand as the devilishly charming, scene-stealing smoking DiCaprio has a memorable monologue. Many also won't forget the impaired sight of some Klansmen as well as the intonations of Candie's right-hand slave, presciently played by a Pulp Fiction favorite, Samuel L. Jackson.

Tarantino explores his oeuvre to arguably new depths (or lows for those faint of heart), but those in his universe won't mind his witty, languorous, striking aspirations which is at heart a homage to the genre as well someone like Nero as a better edited Basterds was to Aldo Ray.