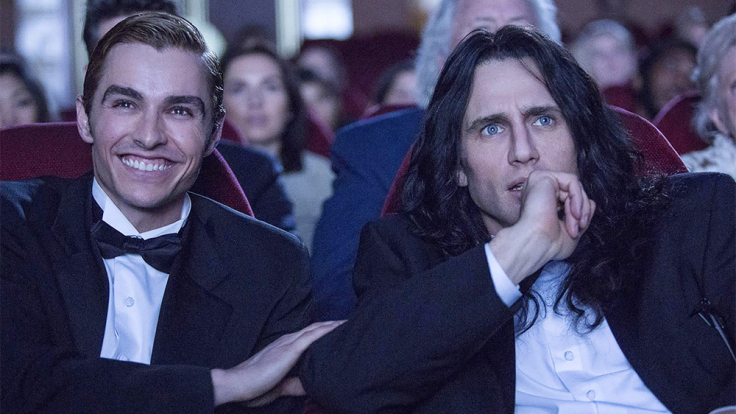 James Franco is quite effective in mimicking the principle character called Tommy Wiseau, he has movements, facial expressions and dialogue matched perfectly to the original character he is playing.  We can see that in out takes at the end of the film. But he gives us more of an impression or mimicking rather than a performance.

The Tommy character reminds us of Ed Wood who was played by Johnny Depp in a 1994 film.  Wood is generally considered the worst director ever, but like the character Tommy believed his work was better than good.

The telling of the story dwells on the production difficulties and the irrational functioning of Wiseau, each scene is an abomination of silliness and disjointed functionality. It reminds us of The Producers because as "Springtime for Hitler" became a comical hit, the film which was laughed at in this production had some success.  It was perceived as a comedy and Wiseau is somewhat hailed as a hero for a moment.  The film only collected $1800 over its first run, but has recouped more of the 5 million dollars used to produce it through midnight showings.

Lacking in comedy even when the subject is beyond silly, The Disaster Artist is dull and uninteresting, it's not even so bad that it's good, it's a disaster.