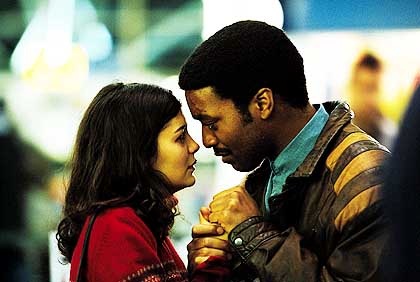 Stephen Frears knows his way around the U.K. and his disturbing taut Dirty Pretty Things has us by the heart from the outset.

There's much more than the discovery in a hotel commode that proves to be an intriguing horror opus sharply scripted by Steve Knight.

A rattled man of Nigerian descent, who happens to be a physician, is Okwe, played with bruised might by Chiwetel Ejiofor.  In this tale of quelled racism, this jaded illegal immigrant is consumed by working as a cabbie and hotel desk clerk.

Sergei Lopez, is the hotel manager, Juan, nicknamed Sneaky, where Okwe toils.  Okwe's duplicitous boss manipulates him as well as devout Muslim Senay, an un-pixie-like Audrey Tautou, in her best work since the whimsical romantic comedy, Amalie.  Senay works as a hotel maid in spite of her temporary visa and develops an amicable relationship with the struggling Okwe.

Like the gritty, digitally-shot 28 Days Later, a variation on the George Romero "Living Dead" films, Frears operates in the underbelly of London with dark wit and a humanistic touch, felt in the secret life of a young Turkish woman and her mindful new black roommate.