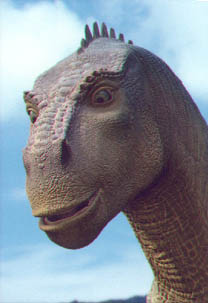 Like a T-Rex striking its prey, Disney slashes into the summer blockbuster season with what will become the standard, not only in animated films, but in any special effects film with Dinosaur.

What is sure to become an instant hit and Disney classic, Dinosaur chronicles from the egg through the birth, growth and times of an Iguanodon dinosaur named Aldar (voiced by D.B. Sweeney).  Raised by a band of pre-monkey like mammals on a very isolated island, Aldar leads us through a childhood that can't help but make you smile.  Suddenly disaster strikes when meteors strike Earth and destroy their "world".  The meteor scene is remarkable and the audio track even more impressive; you can't help but duck in your seat at times.

The story progresses as Aldar and his friends join other dinosaurs in the search of the "Nesting Grounds" - the dinosaur version of Eden.  Along the way Aldar faces challenges of the physical, mental and moral nature.  There is no preaching here, just a good story line that kids are sure to like and hopefully learn a bit from.

The lack of water, food and a good amount of controversy among the group of dinosaurs forces Aldar to challenge "conventional" dinosaur wisdom and lead the band from the jaws of extinction and predators.

Dinosaur is a great blend of humor, lessons taught, wonderful music (not songs - just a superb score), and mind boggling graphics.  In typical Disney fashion there are morals and lessons taught, but not in a high handed way, just simply part of the story.  Combined with the wonderful score from James Newton Howard, the story plays beautifully and moves at a pace where adult and child are completely absorbed.

Adults will take pleasure in the scenes shot in lush areas of the world like Venezuela, Hawaii and Australia and blended with the best animation in the world, while children (the real audience) will be in awe of all they see and hear for the entire 84 minutes of the fast paced, action filled adventure.

This is truly a movie that will make both young and old say "Wow"!