Diary of a Wimpy Kid 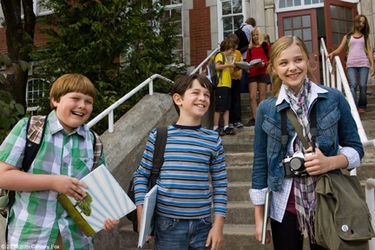 
While kids are glued to the silly antics in the story, adults will find more humor in remembering that dark place they travel through, called middle school.

The popular "Wimpy Kid" books about Greg, played here by Zachary Gordon, may provide some comfort for the kids in the world of school today. They may learn they are not alone and that others face the same halls of danger they face each day.

Here Greg is far from an innocent participant in the action; he may not like the structure of his world but he certainly would enjoy moving up on the rating scale. In fact he moves up and down periodically as he is pushed down or causes difficulty for himself through his own actions.

In contrast Rowley (Robert Capron) is above or below the the understanding of how a new kid in the school must act and react to the older kids. Rowley is a happy kid and doesn't understand that his choice of words, like "let's play," is out of vogue - he should be saying "let's hang out". He is free enough in his lack of understanding to be happy with his station in life.

Mom and Dad (Sterve Zahn and Rachael Harris) are OK but being the youngest boy they treat Greg in a way which embarrasses him in his school society. Big brother Rodrick (Devon Bostick) takes advantage of his station as the older brother who must know more and if he doesn't he can force his will on smaller brother Greg.

Greg must live with rest rooms that have no doors on the stalls, the pecking order at lunch, and girls like Margaret in "Dennis the Menace" who are assured they are superior to everyone else. But Greg is further humiliated when his wrestling opponent is a girl who defeats him. While the safety patrol gives him a place for a time it turns on him later.

To make things worst just when it appears Rowley will make a fool of himself with his mother they perform a spectacular dance which give Rowley greater status and a high place in the pecking order.

It all reaches a climax around a festering piece of cheese which provides Greg a door to move himself up on the list. The cheese is almost as important as it is in a Wallace and Gromit film.

All the every day barriers which a young kid faces play out comfortably here for kids. It allows kids to laugh at Greg and their friends and themselves. It provides an impressive vehicle for kids to understand and laugh at the same time.