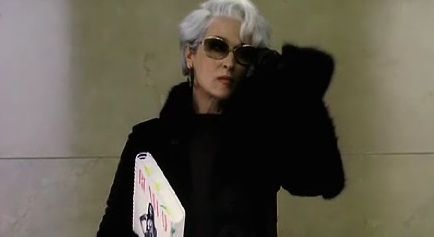 
Summer usually isn't the time when you can see Meryl Streep in two movies at the cineplex, but the two-time Oscar winner delivers not only for Robert Altman in the current A Prairie Home Companion, but also in the funny fashionista feature film, The Devil Wears Prada.

Starring Anne Hathaway (Brokeback Mountain, The Princess Diaries) along with Streep, the homely is matched with the imperious with predictable, but bright and sassy results, nearly on a level with Mike Nichols' very satisfying Working Girl.

Hathaway's Andrea "Andy" Sachs applies for the job as Miranda's second assistant, as just a size 6 she's called the "smart fat girl". Her goal is to use her journalism background from Northwestern to move up to the "New Yorker" magazine, but Miranda will get the naive one in her clutches in ways that have an amusing kick for those (especially adults) looking for some counterprogramming sophisticated comedy right now.

Stanley Tucci is the fey, right-hand man to Miranda and offers a sympathetic character who'll makeover the giraffe Andy in ways that could move her from her kind chef boyfriend (Adrian Grenier of HBO's "Entourage") to handsome writer (Simon Baker of Something New). Kudos to the chic wardrobes on view from Chanel, Valentino, Donna Karan, and Prada, of course, complements of costume designer Patricia Field that will provide many a sight for sore eyes.

The way this fairy tale/black comedy clicks into its virtuous backbone by using the industry and its glamorous, artful ticks may not make for a wicked transformation, but the characters etch out personal and professional angst. At what expense does one devote his or her all to career focus to a diva who is lonely and a bit sad? Tucci and British actress Emily Blunt as first assistant Emily manifest the cost, the latter in a wonderfully humorous turn.

And, while Hathaway is fine as the young woman who won't disappoint in a clacking stiletto, Streep's unsympathetic portrait as the gray-haired bitch from hell is able to savor humanity in ways that keep everything from the montages and pop tunes from getting too frivolous. She knows how to sidestep the cliches while having fun with a role that lets her talent shine amid the gopher demands and insults.