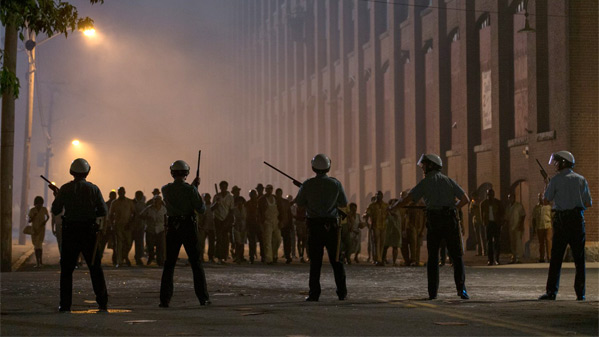 
Spike Lee had his Summer of Sam and now award-winner Kathryn Bigelow (Strange Days, Point Break) has Detroit, another incendiary, unnerving recreation based on accounts pieced together set during the sultry season of 1967; probably more impressive for the atmosphere created than the looseness of its characterizations. In ongoing current turbulent times with Black Lives Matter in the consciousness and lives of a tirelessly persisting metropolis permanently scarred by the impactful incident.

Detroit is a swirling, sweeping portrait that is by turns touching and infuriating, as well as excruciating in recounting the mean streets of the city (the 12th in this case) compared to last summer's solid look as the rise of hip-hop culture in a tough City of Angels (Straight Outta Compton). An after-hours black nightclub (surrounding the Algiers motel which would be demolished in the 1970s) raid by a largely white police resulted in three black men dying as well as the severe beatings of seven black men and two white women.

A look at inner-city racism (animated) gives way to a thriller-like procedural for awhile in this technically sharp if often chilly piece with sorrowful latter sections on the emotional and legal ramifications. The crafty Bigelow has rigorously fashioned a tale that some may relate to her more extraordinary (well-rounded) Zero Dark Thirty when it comes to the punishing, perverse way around decency that sparked some controversy. A horror-like home-invasion tale captured with intense claustrophobia by Bigelow's trusted lenser Barry Ackroyd (The Hurt Locker) with behavior codes in reaction to an insistent threat bears down with startling resonance.

Some characters in particular stand out in what is definitely charged, wounding and filled with a certain political outrage. Will Poulter's beat cop Krauss epitomizes streaks of menacing ruthlessness and biased ire. John Boyega (Finn in Star Wars The Force Awakens) exudes politeness as a dutiful, dignified grocery officer security guard Melvin who gradually gets the picture of an unbearable encompassment

Bigelow's colleague from The Hurt Locker, Anthony Mackie, is an impassioned Algiers resident swept up in the abusive violence after facing North Vietnamese on the battlefield. Perhaps the most involving portrait is by Algee Smith as aspiring Motown star Larry of The Dramatics whose performance at The Fox Theater is suddenly pre-empted (Motown music had been playing to the delight of many earlier before all hell broke loose) truly is endowed with a suggestive, sensitive comportment. Smith could easily be a star on the rise with his subtly pungent cogency in the face of police brutality. Jason Mitchell also cuts a notable streak as the reckless agitator connected with Larry in the escalating mayhem.

Detroit instantly has a striking intimacy of an event with personal and societal imprints that may be more cursory in elements of its larger framework and repercussions as represented by Kaitlyn Dever and Hannah Murray (visitors from Ohio) even John Krasinski as Atty. Auerbach well-cast against type. Nonetheless, Bigelow and her Zero Dark Thirty (always redoubtable in his research) writer Mark Boal know how to push the buttons (with precision) on a wrecking ball of an atrocity with malevolent and finally humanistic persuasion.