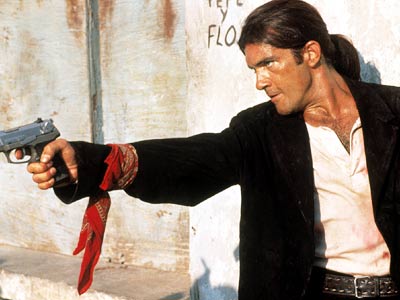 
Antonio Banderas and Salma Hayek are attractive and sexy actors but they can't save Desperado. It has the quality of Attack of the Killer Tomatoes and will probably be on Mystery Science Theater 3000 on the Comedy Channel in the near future.

Mariachi (Banderas) follows a trail of blood to kill the infamous Mexican drug lord, Bucho (Joaquim De Almeida), who killed his wife and son. He is assisted by a friend (Steve Buscemi) and bookstore owner (Hayek).

The entire premise of this film is designed to allow Mariachi to catch up with bands of desperadoes and slaughter them with his hand guns while they shoot at him with automatic weapons. Rather than making the Mariachi a super hero like some characters on the screen today, director Robert Rodriguez chooses an unbearably silly cavorting of reality. He calls Desperado a weird, contemporary western. It's weird, makes little sense, and worst of all, it is totally lacking in entertainment value.

Rodriguez may have potential, but this film will not help his reputation.

Cheech Marin and Quentin Tarantino play small parts and are quickly disposed of in the violence of Mariachi and Bucho.