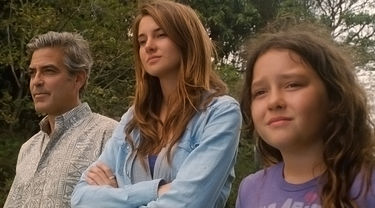 
Alexander Payne's first film since the highly impressive Sideways again bristles with much humanity and wit, and it helps having George Clooney damper down his Hollywood star image in an extremely well written and acted family drama. For certain discerning audiences it may not have enough visual verve with a narrative whose pace loses momentum in its second half.

Nevertheless, The Descendants, which thematically may also echo Payne's poignant About Schmidt, is another finely nuanced road-trip tale set around the picaresque Hawaiian islands beautifully lensed by Phedon Papamichael with sweet ukelele sounds. Its lead character in Clooney's easy-going, wealthy, busy land baron/legalese Matt King (whose heritage was traced by missionaries to regal native Kamehameha) isn't the brightest guy by any stretch. He is very watchable through the compilation of ethos that the Oscar-winner endows with range and verisimilitude in a tale keyed by Matt's recurring voice-over monologue.

It's the wrestling with tragedy in the script by Payne, Nat Faxon, and Jim Rash (longtime collaborator Jim Taylor serves as a producer) that services an arc of  understanding with some leanings towards the existential (ala Jean Renoir). Matt's voracious wife in Elizabeth (Pattie Hastie) is first seen in good spirits before a waterskiing accident leaves her comatose. The movie doesn't ignore her and the effects of being unresponsive.

Matt then has to find a rapprochement when suddenly having to watch over his lively daughters - 17-year-old angst-ridden Alexandra (Shailene Woodley) and 10-year-old Scottie (Amara Miller). Instances of volatility arise while Matt has to decide how to handle a huge plot of undeveloped picaresque Kauai land inherited through a family trust while Alexandra tells him about mom spending time with realtor Brian Speer (Matthew Lillard). Locating the "other man" will add to the significance of having family and friends together during such a serious time.

With bittersweet, if rambling reflection, reinvention and revelations unspool with low-key satirical touches as the scribes (including Payne, working perceptively from Kaui Hart Hemmings' novel) expertly express the emotions of family when it comes to anything like grief, betrayal, anger, guilt, frustration, even love. The thoughtful, tight control by Payne over the material allows for sensitive, layered characters to blossom through sound, sensible individual scene development.

Besides the class of Clooney (whose darkly tinted Gov. Mike Morris existed more in the fringes in his well-acted political drama The Ides of March and has a better chance of an Oscar nod here), the daughters as endowed by Miller, and, especially, a winsome Woodley, never fail to impress. There is quality backup from Beau Bridges, Robert Forester (as Matt's father-in-law), Judy Greer, and Nick Krausen, who makes for an interesting addled surfer boyfriend for Alexandra.

Clearly Payne spends the time to always find authenticity through his attention to the variable nature of life (grief-stricken and joyous, sometimes simultaneously) and compassion for what is life-affirming. What is delicately drawn with integrity and emotional resonance in "The Descendants" (thanks in large part to how dutifully Clooney maneuvers a warmth through the roiling beneath an effectual man born of royalty) still makes it wonderfully akin to his previous outings in an affecting, provocative way.