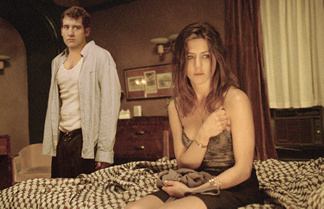 
Jennifer Aniston tries something a little different here as she plays sophisticated Chicago business woman, Lucinda, who experiences something horrible with a man she has just met.

The man she shares this unfortunate night with is Charlie Shine (Clive Owen) an adman she meets on a commuter train. The two have drinks, lunch the next day and before you know it, they're falling into bed in some fleabag hotel. Yes, they can afford a nice room, but because of her husband's business someone might recognize her at the posh spots in town.

Lucinda's married to a man she hardly sees and she also has a small daughter. Charlie is married to a teacher who mostly ignores him but not their very sick teen daughter who has diabetes.

I won't give anything away by telling that a sadistic robber breaks into their room, beats Charlie and molests Lucinda, all of that is in the trailers.

The film turns into a pretty good thriller when the lowlife robber invades Charlie's life, wanting more and more hush money. That forces him to walk a tightrope while trying to keep his family together and preventing his boss and coworkers from knowing that he's being squeezed. That is quite a task because his face has been beaten to a pulp and he's completely distracted from his job.

Owen is perfect in his role, he's a large man with a bit of a hounddog sad expression most of the time. Aniston holds her own playing a very different from usual character. She's a little flirty, but in full control of her emotions and completely believable in her role.

Although some of Derailed is predictable, there are still a few surprises which make it a smart and entertaining thriller.