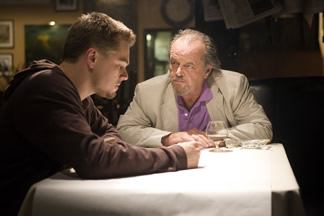 
Director Martin Scorsese scores in a Boston bloody battle field between cops, troopers, the FBI and the underworld. With some reminders of Whitey Buldger's Boston imprint and skilled performances by Leonardo DiCaprio, Matt Damon and Jack Nicholson the script is frightening and even periodically comical. It holds our attention and interest even when the slaughter is way over the top.

Visceral and striking, The Departed is much more than a remake of the Hong Kong picture Infernal Affairs. As one of the finest directors in American cinema today, Martin Scorsese, the man from Little Italy, has his way with the cop/underworld genre in Beantown. This efficient, cool film, senses its storyline for today's reality, a Good Fellas with cell phones.

Matt Damon's Colin was befriended at a young age by Jack Nicholson's local kingpin Frank Costello. Costello sparks the ambition in the kid to work his way to a high place in the Massachusetts State Police and become a top detective (a Stadi). He'll remain, however, under the auspices and employ of the crafty Frank.

Billy Costigan, done with intensity by Leonardo DiCaprio (The Aviator), also worked his way as a Stadi. However, Capt. Queenan (Martin Sheen in a role originally intended for Robert DeNiro) sees something in Costigan's difficult working class life that might be best used to bring Costello down. Billy will drop out of the force when brought into the office of Queenan with advisor Dingham, a potent, no-nonsense Mark Wahlberg.

The catch here in the devilishly enticing script is that each side, cop and criminal, realizes that they are being ferreted out, and it could be lights out for the first one caught.

There is a strong sense about the consequences of personal choices, a moral resignation that gives weight to the "faithful departed", as Scorsese doesn't lose sight of the importance of religion around what has eroded or blossomed over the years.

Monahan has given a top-flight cast much lively, wry dialogue, especially Wahlberg, Alec Baldwin (as Colin's superior), and, of course, Nicholson. What works so well as the characters add much nuance from the nature of their predicaments is how Damon and especially DiCaprio involve one with their struggles in all of their subtleties.

Ray Winstone and Vera Farmiga are among the best of the rich supporting cast as the menacing Mr. French and a psychatrist who gets close to Colin and Billy.

Scorsese in working with his esteemed production team, including longtime editor Thelma Schoonmaker, gives Boston a modern vitality. The setting holds the same importance as Clint Eastwood gave it in Mystic River as the characters embrace the sudden, enveloping narrative turns.

For those who know the Hong Kong original, the masterful director definitely uses it in an extremely coherent, well-paced way. It's an efficient, resonant reinvention of a complex story that never seems gratuitous, even with the disturbing nature of Frank, relished by Nicholson, and shocking violence, especially before a rat finally crawls on a ledge.