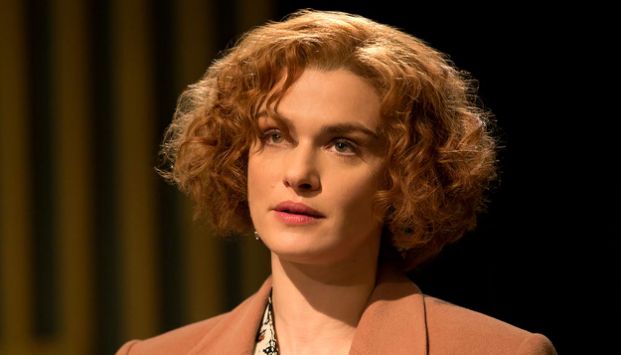 
This new contentious factual political drama from Mick Jackson (L.A. Story, HBO's Temple Grandin) does have noticeable thespian prowess and individually potent passages, but its unsophisticated nature  (especially on the production side) renders it less suitable for the silver screen.

Denial stars Rachel Weisz, Timothy Spall, Tom Wilkinson, and Andrew Scott with Weisz (wife of former 007 Daniel Craig and an Academy-Award winner) being the protagonist in what is mainly set in the courtroom (where it has many compelling exchanges).

Her historian/academic Deborah E. Lipstadt (into jogging and enjoys her pooch) is a red-headed author of two books (which writer David Hare adapts here) which prompted a defamation suit by Spall's fascist advocate and Holocaust denier from Britain, David Irving. The respected historian is impelled to show that the most horrible atrocities of the 20th Century actually occurred nearly two decades ago when she was teaching Jewish studies at Emory College in Atlanta.

Hare's script, which has a certain timeliness to it given the current U.S. climate around the presidential campaigns, puts Lipstadt into the throes of the British judicial system where she has solicitor Anthony Julius (Andrew Scott) and barrister Richard Rampton (Tom Wilkinson) fortunately on her side. They urge her nor any Holocaust survivors to take the stand. This leaves Lipstadt more of a peripheral figure than Jackson and Hare intended, even if the denouement provides some compensation from the undue way the defendant (whose decision obviously is important) is represented throughout.

Not to say that Weisz doesn't have some important exchanges with her strong male counterparts, starting with Spall's very unsympathetic, yet cunning Irving. Lipstadt just isn't opened up perhaps because of the filmmakers' focus to give her firebrand nature that crucial, compelling conviction. So, besides the faceted Spall, Wilkinson and Scott acquit themselves rather well with the latter's character displaying his earlier handling of the Princess Diana divorce case.

Denial has its intense moments, flashy legalese and a moving excursion to the place where it all happened as forensics begins to come to the fore. In the end, it's hard to deny that it should have been a more sentient and emotional experience, as unnerving as portions of it can be.