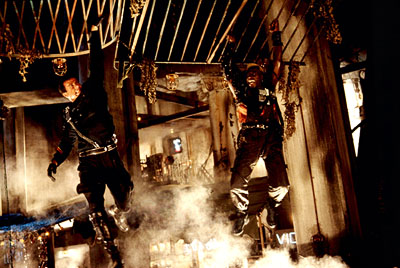 
If Mel Brooks had directed this film it might have been one of the best satires of violent films ever made. In the hands of director Marco Brambilla, however, the comedy works but the action scenes, which are very expensive, are also very dull.

In 2032, San Angeles (San Diego to Los Angeles) a criminal from the 20th century, Simon Phoenix (Wesley Snipes), along with the police officer who captured him, are freed from a Cryogenic prison state. The police officer, John Spartan (Sylvester Stallone), known as the Demolition Man, was frame. Spartan is recommissioned to capture Phoenix because peace rules in 2032. There is no violence, swearing or sex. Imagine what these two can do to that society. There are some sub plots but the main focus is the gun battles between Snipes and Stallone.

The comedy is framed by Lenina Huxley (Sandra Bullock) who collects memorabilia from the 50s and 60s that precipitates the most popular songs of 2032 which are: "Plop, Plop, Fizz, Fizz", "The Armour Hot Dog Jingle", and "Good Things from the Garden". When Lenina asks Spartan to have sex 2032-style, she plays the "Love Boat Theme". The biggest laugh comes when the 61st amendment to the Constitution is discussed, it allowed Arnold Schwarzenegger, a non natural born citizen, to become president.

The comedy is fun, the action is dull and the script incomplete. This could have made a good spoof but it is not much of an action film.