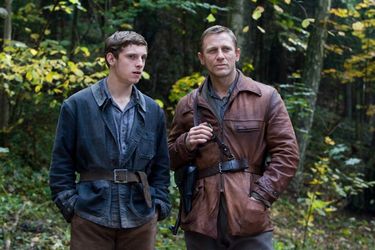 
Edward Zwick's Defiance is large-scale drama about Jewish brothers-in-arms in 1941 Belarussia. With Daniel Craig, Liev Schreiber, and Jamie Bell leading the way, there's plenty of action and emotion to go around for over two hours. Yet, this overly earnest look at the varying reactions to Nazi violence doesn't provide much dramatic impact as a more restrained approach would have worked.

Not to say that there isn't much artistry on view from notions of heroism, compassion, and revenge. Craig, after Quantum of Solace, still can be a human killing machine, but finds another path to resilency in being proactive against the horrors brought onto his family. His Tuvia, along with Schreiber's panther-like Zus and Bell's younger Asael, reluctantly form an alliance with Soviet rogues against the Germans.

Eduardo Serra's deft use of lighting hued in green, grey and blue immerses one into visceral turmoil in a forest environment, but the production detail surpasses what is necessary to make all the issues of the brothers resonate. Zwick, also a co-writer, allows for many roles and, thus, story that ultimately limits its payoff as one tries to digest it all.

Tuvia utters lines like "Our revenge is to live", in essence becoming an inspirational force in Defiance as the numbers on the side of him, Zus, and Asael become sizable. A dark, gritty sensibility permeates this languishing latitude between war and peace and the off-center ethnocentric and familial relations in trying to make sense of it all. In the hands of Zwick, who has flourished in depictions of courage like Glory and The Last Samurai with flawed characters who become less narcissistic, a pretty violent magnum opus dilutes something remarkable done by brothers when it comes to survival that needed to be rendered in a more intimate, striking way.