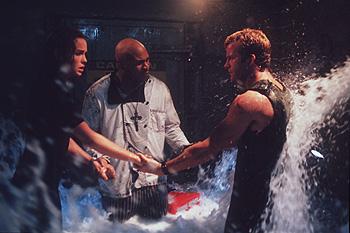 What a wonderful premise for a movie...genetic modifications to shark brains to help Alzheimer's patients.

What a pity that for all the great actors/actresses the movie comes no where near meeting its potential.  Don't get me wrong, the story line had the potential for a superb film, but falls short and becomes only a very watchable one with good special effects.

Our story begins with a very Jaws like scene involving teens and a sail boat, but with a nice twist.  Now enter a board room with Russell Franklin (Samuel L. Jackson), the money man behind the 200 million dollars already spent in Alzheimer's research, being challenged to keep funding the project despite a mishap for another 48 hours by Dr. Susan McAlester (Saffron Burrows) the lead on the project.

Upon arriving at Aquatica Research Laboratory, Franklin is treated to meeting the "brilliant" Dr. Whitlock as he is seen urinating off a platform into the sea.  As the straight man for the movie, Franklin  observes, "If he's so brilliant, why is he pissing into the wind?"  This is a cute scene and helps setup the characters.  The tour continues and you are introduced to Carter Blake (Thomas Jane) as the independent  "shark wrangler", Sherman "Preacher" Dudley (LL Cool J) as the parrot loving, bible referencing cook who has the best lines in the movie, and the balance of the cast: Tom Scoggins (Michael  Rapaport), Janice Higgins (Jacqueline McKenzie).  Now come the stars of the movie...all 8000 pounds of them...the sharks.  Without revealing too much of the movie, suffice it to say, bedlam ensues.

The shark effects are equal to what we have all seen in Jaws, but the use of these effects is truly dramatic at times.  To have the timeless predator of the shark raised to the thinking capacity of dolphins or more adds some nice spice to this movie.  The set itself is very good and the balance of the special effects include some nice water scenes, flooding and explosions.  As for the gore factor, I'm pleased to say it was used for dramatic effect on rare occasion.

The scare factor is not that of Jaws, probably because we've come to expect this of sharks, but the twist of intelligence and plotting makes for wonderful suspense.  When you leave the theater, you will notice they have left a sequel as a possibility and by my mind's eye, it could be a good one.

On the web at: www.deepbluesea.net