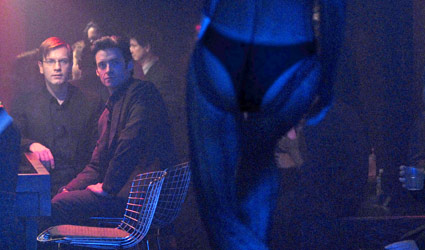 
Deception is one of those films that has all the tools to be an interesting psycho murder mystery in which the man can not resist a certain women even though he should know better. For some reason this film is constantly just out of phase and too obvious with its clues to draw us into the web of intrigue which is spread by Hugh Jackman's Wyatt Bose.

Jonathan McQuarry (Ewan McGregor) is the quiet accountant leading a dull precise life somewhat like Will Ferrell in Stranger Than Fiction. Director Marcel Langenegger, who has been directing commercials fails to hide clues in plain site, he openly reveals what should only be obvious after the fact.

But the position McQuarry finds himself in after being set up by Wyatt Bose might be one to envy, he finds himself on the sex circuit - adults who want sex with no entangling relationships - and this film, aside from the secret plot against McQuarry, makes the lifestyle rather attractive. McGregor's McQuarry has one night flings with Natasha Henstridge, Charlotte Rampling and Michelle Williams who is called S. No one tells their correct name. The participants and process remind us of Aldous Huxley's sex circuit in "Brave New World."

Of course one dies to direct suspicion, Rampling ends up on the cover of a fiance magazine and he breaks the rules with Williams by spending the evening talking and falling in love with her. The villain sets up McGregor as smoothly as Jimmy Steward is pulled in by Kim Novak in Vertigo. Here we are led to believe - but we don't - that she has been murdered. That brings Detective Russo (Lisa Gay Hamilton) on the scene; she fits right in when she doesn't believe McQuarry's story. No one would as he bumbles and stumbles as he tells what happen.

There is some interesting action, a few international twists mostly having to do with money and what we suspect turns out to be the case. A leak and an explosion lead us to and from the truth and we find that an accountant does measure his moves carefully.

Deception has something to offer, but it's not wrapped up or made up enough to be a gift we that we can't resist.