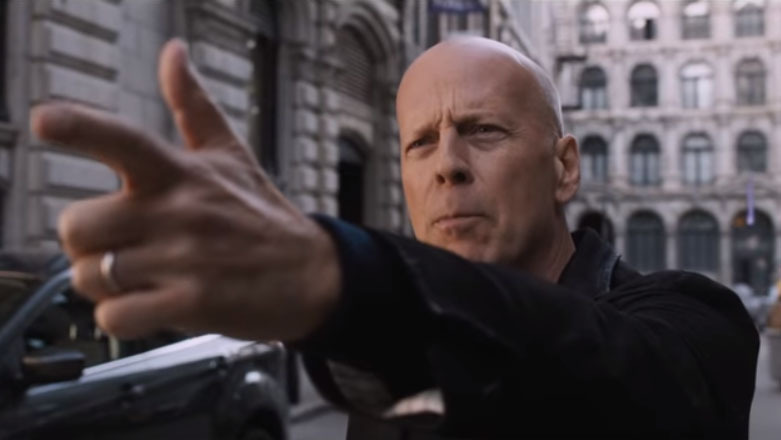 Willis plays Paul Kersey, a mild-mannered Chicago surgeon.  He's happily married with a teenage daughter about to leave for college.

While Paul is at work, three men break into their house and kill his wife (Elizabeth Shue) and hurt his daughter
(Camila Morrone) so badly, she ends up in a coma. This cleaned up scene is welcomed after the very disturbing rape and murder scene that's depicted in the original film.

His whole life changes with the tragedy.  He can't sleep in the bedroom he once shared with his wife, so he moves to the basement sofa.  He orders take-out and after weeks, it looks like cleaning up after himself is the last thing on his mind.  He goes back to work to try to save the lives of the drug dealers and gang members that are continually wheeled in on stretchers.  After his shift, he goes to his daughter's room at the hospital and reads to her hoping that she can hear him.

At first, Paul trusts that the police will find the murderers, but after a few weeks, he decides to take things into his own hands.  Picking up a glock that falls out one of his patients' pockets he learns how to use it by watching how-to videos online.

He starts out trying to find the killers, however he shoots at anyone he believes to be a bad guy.  Wearing a black hoodie and keeping his head down to avoid closed circuit cameras, he becomes more proficient in his skills.  At odds with his profession, he also doubles down on the violence by crushing a mechanic under a car and pouring brake fluid into a wound.

Paul is dubbed the Grim Reaper on newscasts and is a lively topic on talk radio as callers debate the subject.  Even his brother (Vincent D'Orofrio) can't seem to dissuade him.

One scene has a split screen showing Paul loading and preparing his gun on one side and in the operating room on the other.  It was a thought provoking sight, however most of the audience was cheering whenever another bad guy was taken down.