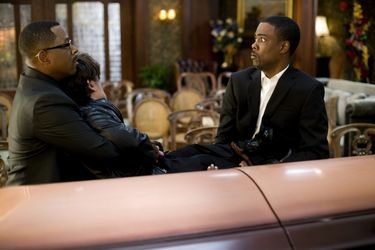 
This is a star - studded movie with serious comedy potential - Martin Lawrence, Chris Rock, Tracey Morgan, all in the same movie - and I was excited to see it but, unfortunately, it was a little weak and predictable, and a little short at only about 90 minutes.

There were some good performances by some good actors. I love Zoe Saldana - she is the “it girl” this year - great in her role as the daughter with man trouble. Ron Glass looking very distinguished with his gray hair. Loretta Devine looking very devine in her smart, black dress. Danny Glover as a crotchety old man sitting on a toilet (didn’t we see that once already?). And James Marsden is the funniest as the accidentally drugged out boyfriend. They all do their part to add laughs to a movie that was already done - seen it - and makes you wonder what the agents in Hollywood are thinking.

It was pleasant enough, with funny parts that made you laugh out loud, including the predictable fight scene at the end of the funeral and the “not-so-dead guy” in the casket that you could see coming a mile away. At least the music was snappy and the food was good. Go ahead and buy some popcorn, it will be worth it for the short time you are in the theater.