Dawn of the Planet of the Apes 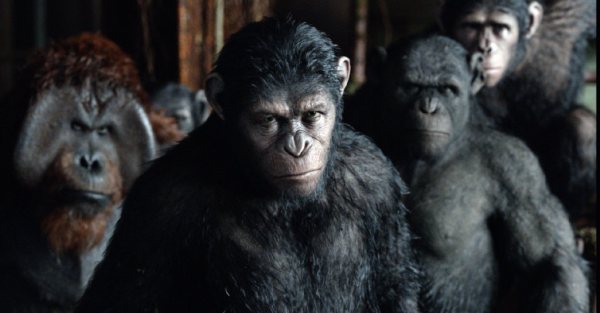 
High-minded slick post-apocalyptic sci-fi is back with a cunning chimpanzee on horseback make for a potent primal tale of quite the tattered society.

A burgeoning ape civilization and abating human control pushes to survivors of a horrible epidemic in a decaying, aged City By the Bay. Action fans will be enthralled as the hirsute really get going with spears and various, unnerving weaponry.

Serkis's Caesar has a valiant quality bring his clan through a decade-long windfall, while the humans like Dreyfus (Oldman) and Malcolm (Jason Clarke) are strategizing about an inevitable power supply loss as well as the what the apes drastically represent to them. It's evident the humans don't get the same type of treatment as their hairy counterparts do.

New helmer Matt Reeves (Let Me In, Cloverfield) works extremely well with his effects/CGI craftsman as a deft ferocity is brought to many sequences, especially a memorable violent centerpiece. The attention to detail to Caesar and his disciples is so good individuality may be a bit troublesome for some viewers leaving a forecasting storyline with much virile punch given the lack of noticeable distaff presence. Still, Dawn consistently fires on all cylinders with Serkis raising the bar for this type of species character in a poignant progression out of the gritty, dystopian progenitors that has a chance to rise as one of the indelible sagas of generation that would even make Roddy McDowall smile.