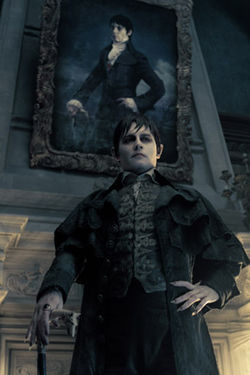 
Director Tim Burton teams up with Johnny Depp for the 8th time, and the result is a unique take on the classic T.V. series that ran from 1966 to 1971.

Depp plays vampire Barnabas Collins (Jonathan Frid played the character in the series) and although the opening has a serious tone, the balance of the film has a more comedic slant.   The television show was wrought with unintentional flubs and cheesy special effects, but it became a cult favorite.

The film opens in the late 1700s where Barnabas as a young man has a fling with Angelique.  She works as a maid in his parent's huge Gothic mansion on the shore of Maine, but is secretly a vindictive witch.   He spurns her because he loves another, so she causes the death of his parents and his girl and puts a spell on him which turns him into a vampire.   She then chains him in a coffin and buries him for eternity.

Almost 200 years later, a construction crew digs him up and after he viciously kills them all (he was most likely very thirsty from his long confinement).  Barnabas is quickly off to find his family's home again.  The mansion is in disrepair and the family's fishing business is closed, the results of competition from a rival named Angie (Eva Green),  who looks curiously like Angelique.

Some of the humor comes from Barnabas trying to fit in with the 1970's.  Lava lamps, hippies and an appearance from Alice Cooper are foreign to him and his pale complexion, stiff manner and proper speech does not fit well with the "anything goes" attitude of the times.

Barnabas finds an odd mixture of relatives now living in his house.   Michelle Pfeiffer is the regal lady of the house, Chloe Grace Moretz is her sullen teen, Jonny Lee Miller plays Pfeiffer's brother, and Helena Bonham Carter is a therapist who takes care of his troubled son who is able to see ghosts.   But most importantly, he discovers that their governess is the reincarnation of his long lost love. Barnabas revamps the business and returns the family home to its prior gloomy glory, but he has to fight tooth and nail, you might say, with Angie who is still in lust with him.

This film was a mixed bag for me. The classic cars, music and Barnabas' confusion with the era was fun.   The settings and costumes were great, and Depp was good, although his personality and flair were stifled.   Two scenes of violent killings by Barnabas (one shown and one referred to) were totally unnecessary and a disappointing ending that started well enough but deteriorated so much that a werewolf enters the picture, kept it from being enjoyable.