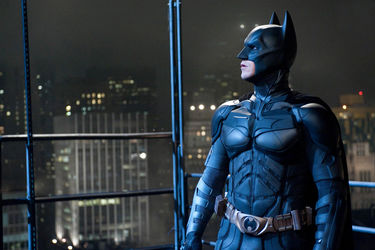 
After Marvel's The Avengers DC Comics has its own cinematic oomph with Christopher Nolan's topnotch capper of a trilogy which may not have the late Heath Ledger's masterfully anarchistic Joker but still is a spectacle with evocative thrills and its share of ambiguity before finally closing the curtain in a provocative, reactionary way.

Not really the sweepingly enveloping crime saga that was The Dark Knight with morally corruptive underpinnings, The Dark Knight Rises manages a timely, haunting account of a billionaire who dresses up as a bat and emerges as an extraordinary crime fighter.

The shrewd, full-circle narrative devised by Nolan, David S. Goyer and brother Jonathan provides plenty to chew on in a rather long, but well-paced storyline starting with a tautly rendered mid-flight skyjacking of a CIA plane.

It's eight years after the events of The Dark Knight left Gotham City in a tattered state with Bruce Wayne (Christian Bale) isolated in his mansion with loyal butler (ultimately put to the test) Alfred Pennyworth (Michael Caine) reproaching him, noting that "You're not living, you're just waiting." The jaded Bruce's alter ego took the fall for esteemed D.A. Harvey ('Two-Face') Dent's demise, ostracized into a Howard Hughes-like existence.

A fey, alluring and tough cat-burglar Selina Kyle (done with some smooth wit by Anne Hathaway) rummaging through Wayne's safe begins to get him to shift his priorities and focus. A brewing storm arrives in the massively thuggish and very shrewd Bane (Tom Hardy) donning an unusual mask (for nearly the entire movie) which helps relieves some of pain from injuries received while incarcerated. His plans to terrorize Gotham taps into the Wall Street zeitgeist over the past four years with an agonizing hell raising fury.

Of course, the very reliable Gary Oldman is back as the between-a-rock-and-a-hard-place hospitalized Commissioner Gordon needing to face the physical and intellectual prowess of someone very dangerous, especially when he gets his hands on a Wayne Enterprises energy reactor. Gordon's determined protege Officer John Blake is another solid role for Joseph Gordon-Levitt (50/50). The wily head at Wayne Enterprises Lucius Fox (Morgan Freeman) gets some needed assistance from philanthropic wealthy board member Miranda Tate (Marion Cotillard of Midnight In Paris) when an inimical intimating appropriation ensues.

What the filmmaking consistently offers is a series of extremely well-staged set pieces (whether in a penitentiary or on a football field) as Bale is allowed to explore the duality of character more because of a thoughtful Nolan as the conductor to make the personal and larger tussle unfold with pulse-pounding verisimilitude. Not that even the "quieter" moments can't be shattering themselves considering the extent of Bruce's relationship with Alfred especially when a letter from "The Dark Knight" comes into play.

Even a tyro Hathaway with the helmer has a slinky kind of comfort fitting into a delightful labyrinth that sneaks up on you as Gordon-Levitt, Hardy, and Cotillard able to excite their roles from working on his mind-bending (demanding a second viewing) "Inception." While Freeman and Caine help Bale navigate the unconventionality returning to his life; the former helps fortify the Bat cave this time after a two-wheeled Bat-Pod with The Bat-a jump, prop jet and an Apache helicopter.

Nolan again works with precision in union with his collaborators (more than half of the film was shot using IMAX cameras) including the pristine compositions of lenser Wally Pfister and the elegantly mood score by Hans Zimmer. If some might find this compelling blockbuster hobbling somewhat (or more than its predecessor) from an emotional, staggering complexity, this dark knight rises through Bruce's tormented past (bound closely here through the League of Shadows and Ra al Ghul in Batman Begins) and present to include the best kind of astonishment and excitement (with a little politics to boot) that Hollywood can offer.