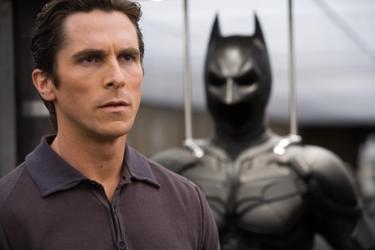 
With stalwart headliners in Christian Bale and the late Heath Ledger, Christopher Nolan seems to have raised the bar for superhero movies if The Dark Knight clearly indicates so. It proves undeniably formidable in the IMAX/giant-screen format.

The director bracingly rebooted a carnivale of a franchise with Batman Begins (off of Bob Kane's DC iconic comic schematic), and it shows in how it's scaled for those looking for visceral, intelligent strokes. The dynamic result manifests modern-day commitment to the intersection of violence and humanity in a "world without rules".

Bale's playboy in Bruce Wayne and conflict as crime fighter has come across as a bit right-wing for Gotham City's citizens, and Nolan, along with brother Jonathan, have formulated a smooth, if branched script. The importance of someone like Batman has consideration in this dynamic juxtaposition of power, subversiveness, and corruption.

The ambitiously solemn sweeping crime drama has an unpredictable bank robbery that sets a rather anguished mood for much of an enthralling experience that knows how to thrive off of character and viewer vulnerability.

An understated Lt. Gordon (Gary Oldman) has worked hard with the leather-clad vigilante and civic-minded District Attorney Harvey Dent (Aaron Eckhart) to keep the criminal underworld at bay. Billionaire Wayne doesn't see himself moonlighting much longer, and wants to better his chances with assistant D.A. Rachel Dawes, as Maggie Gyllenhaal assumes the role with more sass, as the legal eagle has been making waves with Dent.

Ledger's penultimate effort in a mainstream motion picture takes the clown, scarred in weathered white makeup with a smile in deep malevolent, anarchistic territory. His Joker "chooses chaos" that makes Gotham City a place for maniacal terror to simmer, an ultimate demon for the ages that puts Batman in a tremulous position to finally take off the mask. Even when behind bars, the psychotic mastermind seems to be in control as the virtuous Gordon, Dent, and Batman reluctantly form a united front.

With eloquence and creativity, the Nolans breathe an exciting, nearly chronological instability into quite an introspection into the city (filmed nearly entirely in Chicago with luster by Wally Pfister) which includes a dramatic turn for one key character, and the murder of another.

In a summer oversaturated with the superhero genre, this one even surpasses the high standards of Iron Man and the visual aplomb of Hellboy II. An intrepid ingenuity takes on a capricious, sometimes sadistic ride that leaves things in such a shattered state that demands another follow-up.

Nolan keeps his thematic elements at a premium, whether its Bruce with faithful butler Alfred (Michael Caine) or with the sagely Lucius Fox (Morgan Freeman). Or, the Joker's abyss-like demented asides which recall the early years of Stanley Kubrick.

Of course, aside from one psychological turn that demands too much disbelief (though not at the expense of character arc), the pacing has the effect of a thunderbolt, as the strong storyline has less philosophical implications as in Batman Begins. Less overrall nuance allows Nolan to be assured in the dynamic action sequences, whether on a highway or or in mid-air, allowing for much taut peril in escapes and chases. Action fans will really be in heaven with the state-of-the-art Bat-Pod, a kind of monster truck.

Even though Bale and Ledger (both in Todd Haynes' artistic I'm Not There) stand out enormously at times, The Dark Knight feels more collaborative on the acting front, though the devil inside is internalized remarkably by both in ways that are frightening and charismatic. In smaller turns, there are appearances by the likes of Cillian Murphy (remembered as Scarecrow), Eric Roberts, and Anthony Michael Hall.

This weighty, original enterprise builds off of the full-bodiedness of the first entry as Nolan works perceptively with editor Lee Smith to sharply connect some thrilling scenes to the prominent production designing of Nathan Crowley to the surging atmospheric sounds collaborated on by Hans Zimmer and James Newton Howard. It's quite gratifying to say that the hard-boiled The Dark Knight boldly goes beyond the Caped Crusader's origins to maximize the moral corruption and justice with bruising robust precision.