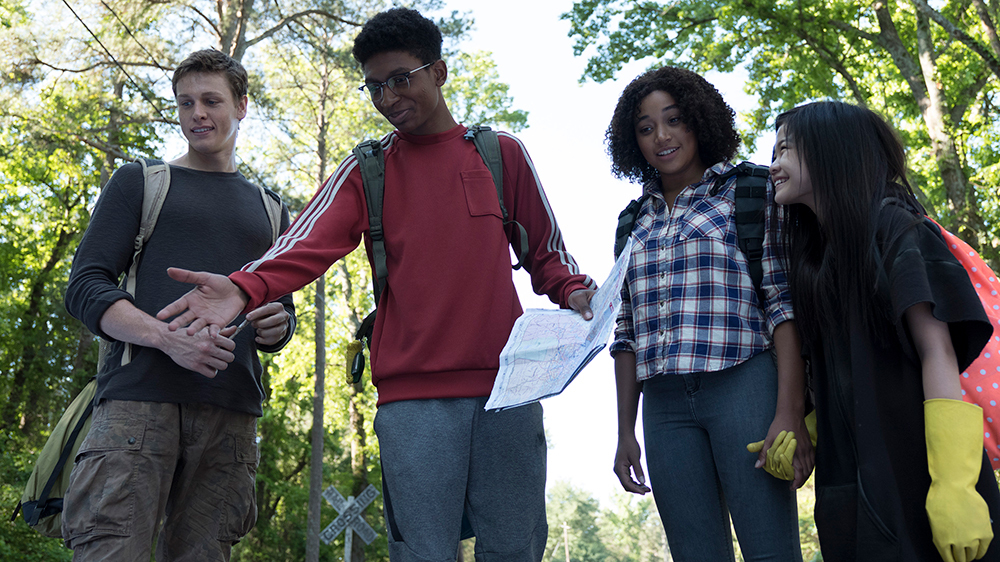 
A plague that kills off 98% of all children finds that the few remaining may have special powers which range from levitation to genius in mathematics.  Each kid is coded with a color ranging from green for the specialists in math and orange for the powerful ones who can cause difficulty in the political structure which is fighting to survive.

Amandia  Stenberg plays Ruby, the central character who quickly learns that being an orange is dangerous to her health.  Using powers like that of Obi-Wan Kenobi she is able to persuade the doctor assigned to evaluate her that she is a green not an orange.  It all happens as her eyes turn copper color and we hear long wave background music and it is clear that she can get the doctor to do what ever she wants.  At other times she sends her mental strength to persuade guards to allow her and the three others she escapes with to pass without challenge. Ruby also can learn the history and future of other characters simply by touching them which reveals to her the character and what he or she has in mind.  Quite like Johnny Smith in The Dead Zone by Steven King. Ruby runs with two male teens and Zu (Miya Cech) who is quite effective as a little girl with powers of her own but does not speak.

The early identification of the characters and the influence they can have on who ever that are interested in creates a firm foundation for the running by the four as they look for a better location to hide and live free rather than in the barracks in which they are kept.  Or as in the case of orange like Ruby death.

The teaming of young folks is interesting, but not very realistic, as they have locations with large populations just hiding in wooded areas in rather large structures.  For some reason the vast armies of the country can't discover these camps.  More difficult is the constant betrayal of various characters which leaves the script hanging loose with no steady stream of direction.

The sound beginning fails as the betrayal rises and even more discouraging is the lack of an ending to the story.