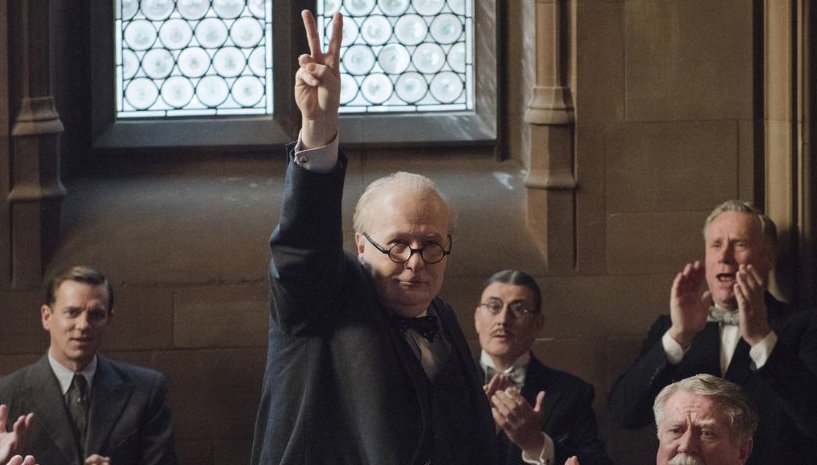 
After success a decade ago with Atonement Joe Wright returns to (the early portion of) World War II maybe not with the same emotional magnetism but a fine assertive tone filled with perseverance and nationalistic pride of Great Britain.

His Darkest Hour (in memory of the late Sir John Hurt who was lined up to play Neville Chamberlain) builds from the eminence of a large-scale Nazi invasion. It's another impeccable production of emblematic replications; sharp lensing and splendid design is complemented by a plangent performance by vividly prosthetic made-up and larger-than-life Gary Oldman as Winston Churchill when he became Prime Minister in the spring of 1940. The filmmaking will reach discerning cineastes in tangential ways to equally, if more polished and poignant cinematic fare earlier this year like "Their Finest" and Christopher Nolan's masterful Dunkirk.

With Western Europe vulnerable to the gritty German drive, Neville Chamberlain (Ronald Pickup, in for the cancerous Hurt) loses popularity with the masses. Oldman's obdurate Churchill is the one to couple the parties, but his polemicist side rises when unwilling to adjudicate with the likes of the Fuhrer.

Staunch backing on the domestic front comes by way of wife Clementine (Kristin Scott Thomas utilizing poise and brassiness well), yet King George (Ben Mendelsohn) is somewhat leery. At the same time, the new leader has just recruited a new clerk Elizabeth (Lily James) who is rather browbeaten by his temperamental, irascible nature. Moreover, Lord Halifax (Stephen Dillane) is impelled from letting Churchill exercise armed intervention. A drab cabinet underground shelter is often the setting for many powwows. Having the locus on the various ties provides vitality in accordance with the graduating stress with much at stake when dealing with cohorts, adversaries, France, and the U.S. (by phone).

Within this haggard, but robust sexagenarian there is a determined aggressiveness with plenty of cigars and whiskey as Oldman exhibits acute, sharp-witted flexures into Churchill. While the backup provides the balance for the tenacity and hubris to be a vividly convincing construct. Dillane is faced with the unenviable position of being the necessary unabating opposition.

Darkest Hour inadvertently chronicles a microcosm of a collective conviction as what's depicted really just a prelude for costlier conflicts. Some may find a little in common with the Brexit situation if currently less warranted when embracing hegemony is concerned. Maybe with the ornery rigor of an observantly piercing Oldman a chilling portrait of extolling and misleading presents a foundation for tenacity and triumph.