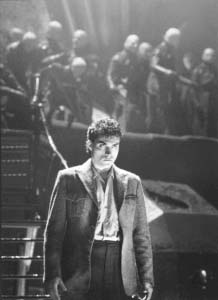 In a Blade Runner city it is midnight on The Day The Earth Stood Still.

A dark science fiction story plays beautifully in the hands of director, Alex Proyas (The Crow). He  depicts a dreary city with no logical time frame.  Filled with stunning visual images that  could be a part of  "Style" on CNN.  Each image holds together individually rather than being a part of a whole.  Cars from many decades fill the streets and clothing style ranges from the forties to the future.

John Murdoch (Rufus Sewell)  is pursued by pale men in overcoats lead by a demonic evil child, who along with an old man of power controls the images people such as Emma Murdoch (Jennifer Connelly) see and experience.  The dark menace stops the world at midnight each day and infuse their collective will (sounds like the Borg, on Star Trek The Next Generation) on to the people in Dark City.  The enforcers float over  the city defying gravity, in the form of  pasty faced black clad controllers.  They arrange death in concert with Dr. Daniel Schreber (Keiffer Sutherland).

Held together by a solid science fiction premise which slowly comes to light, the characters reach for the life they once had.

Crammed full with images and impressions Dark City uses the Blue Line subway to Sunset Beach, a blond hooker, levitation, a city with no Sun light, a confused man searching for reality, his beautiful wife, a cop named Bumstead who wants to solve a series of murders, spinning and twisting of reality, secret potions, mind over matter, a world that is generated by thought, a civilization that exists with limitations as perceived before Columbus, sex, violence, and a city that is physically changed each night.

Dark City is classic science fiction with the light and philosophy of the original Outer Limits dictating the outcome.

It is rated (R) for violence and nudity.