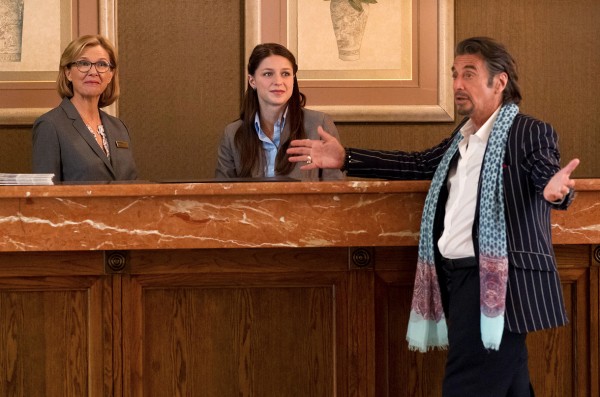 
Al Pacino and writer turned director Dan Fogelman (Last Vegas, Crazy, Stupid, Love.) don't really make sweet music from an intriguing set-up based on a letter that a British folk singer received in 2005, just playing it safe for a contrived, somewhat affecting dramedy about the woes of aging. Even though a number of post-Beatles John Lennon tunes on the soundtrack like Imagine (which was an early title) could help to mitigate an untidy piece of contrived cinema where the main character doesn't really go through change rather than those around him beginning to "come around."

Pacino's much-wedded Collins has coasted on using other's songs to be a musical success catering to nostalgia after a long-ago initially promising project failed to connect with pundits and the public alike. A wild hedonistic lifestyle and on the verge of marrying a beautiful boob half his age he gets a framed birthday present from long-time manager Frank (a fine Plummer).

The notable element from Fogelman's script is that John Lennon was fond of him, writing him four decades or so ago about following his own professional inspiration. So, thematic possibilities around finding one's actual identity and the inanity of what he's been apart of for over half his life, as well as atonement comes into play without convincing execution from the filmmakers. A flaky, dissolute older man is made out to be a kind of darling through his complacency and unchallenging showmanship. Who now cancels his latest tour so he can start on new original material reflecting on what could have been if had the note when it was written.

A tale of regret that may leech on to those who were attracted to the forgettable And So It Goes and more convincing, though flawed, and concurrent Second Best Exotic MarigoldHotel has Danny leaving the City of Angels for the Garden State to reconnect with estranged blue-collar son Tom, a rightfully vexed Cannavale, a very solid character actor of films like The Station Agent. Danny tries to brown nose himself with Tom's congenial pregnant with second child missus (a maternalGarner, getting more exposure from those 'Capital One' ads) and adorable if hyper daughter Hope (Giselle Eisenberg). But, where is the shame and acrimony that might be prevalent after a quite a familial hiatus?

Another tale of redemption happens without noticeable past gloominess not really facing up toDanny's indiscretions seeming like he's deserving of a break during a turning point of a twilight moment. It would have been nice if there was more of Bening's finical New Jersey hotel manager where Danny holes up and attempts to insufficiently inveigle. While one of the songs will have some recalling a now famous Neil Diamond anthem and the story a little of that Brooklyn artist's way around stardom, Danny Collins only surmounts a prevalent mediocrity when rumination surrounds misgivings from a once creative high, while paternally rebuked.