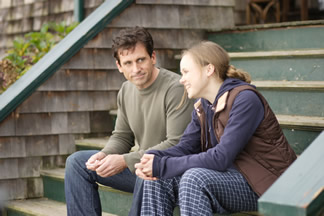 
Steve Carell travels into the territory that fellow comedians Adam Sandler and Jim Carey have taken as he moves into a more serious role in a film with a heart that doesn't take itself to seriously.

Dan the widower (Carell) who has three daughters, Jane (Alison Pill), Cara (Brittany Robertson) and Lilly (Marlene Lawston), is complemented by the paper boy on his news column which he hopes to syndicate. But his immediate concern is daughter number two, Cara who believes she has fallen in love in three days. Dan catches her in a restaurant kissing her young love and he bangs on the glass window like Dustin Hoffman in The Graduate, embarrassing himself and Cara.

The girls are not as enthusiastic about the annual trip to the shore for a family gathering where grandparents (Dianne Wiest and John Mahoney) host the entire family. Dan is the wet-blanket at the event where everyone appears to be enjoying the company, food and games. Brother Mitch (Dane Cook) is the happiest of all because he has a new girlfriend on her way to meet the clan.

Sent out by his parents who recognize Dan should loosen up he wanders into a bookshop where he meets interesting, exciting attractive Marie (Juliette Binoche) who is as enchanting as she was in Chocolat but a little more of a free sprit. The hopeful potential romance is stalled when Dan learns Marie is his brother's surprise date.

What results is a comedy with the feel of Cary Grant in the forties, the situations dictate the flow in which looks and winks and petty unreasonable jealousy arises between Dan and Marie as they attempt to put down the partner each other spends time with. Dan is first to show irritation but Marie begins to scowl when sexy Ruthie Draper (Emily Blunt) begins to show interest in Dan.

Laughs come from a shower scene and Dan's bedroom which is in the laundry room and the frantic action at the summer home involving each of the characters, all of which produces one of the best comedy films of the year.