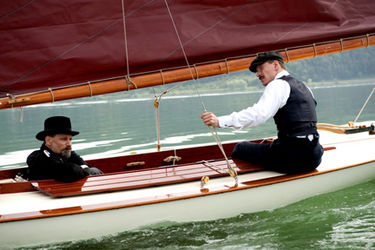 
David Cronenberg's A Dangerous Method explores the complexities of thought and understanding of the human mind through the changing relationship between Sigmund Freud (Viggo Mortensen) and up-and-comer suppressed Protestant Carl Jung (Michael Fassbender) in a Zurich setting at the turn of the 20th Century.

His intriguing approach may be too dry and not daring enough for his more ardent supporters, but there is enough transpicuous control over the script devised by Christopher Hampton (from his own stage play The Talking Cure from the tome A Most Dangerous Method) for the onlooker to process and behold for good measure.

Jung puts the hirsute Freud's psychoanalytical theory to the test on wild child patient Sabina Spielrein (Keira Knightley of Never Let Me Go) which has positive results for a gaunt, seemingly mad woman entering the profession.

The storyline then begins to simmer before flattening out when Jung meets Freud a couple of years hence in Vienna where a rivalry develops as they connect professionally. The main conflict is predicated from Jung being morally anguished on advice from his new friend and surreptitiously acting on this with Sabina over the complacency with wife Emma (Sarah Gadon of Charlie Bartlett). Suffice it to say, a wound-up shrink does more than ponder some well-regarded postulating.

The director brings an earthy, well-lit look to the modestly captured era where characters are confined by the socioeconomic mores of the times and in their nattily close-fitting attire. It provides ample backing for the main character triad to unveil more personality through some iniquities than expected even if Knightley's honest maneuvering into vulnerable guile may be too emotive for some. The result often comes across as an accurate, provocative take on what can be elusive and too cerebral. Mortensen (who worked so well with Cronenberg on A History of Violence and Eastern Promises) endows Freud with poise on the importance of change on how the mind is observed. He has a bracing, voluble rapport with Fassbender (X-Men: First Class) who continues to make actorly strides as Jung internalizes plenty from correspondences and (occasionally heated) exchanges.

A Dangerous Method may not exude the kind of entertainment art-house audiences anticipate (with Knightley perhaps absent over too much of a stretch) as something this disciplined may honor its source too much. The way Cronenberg handles neural nooks and crannies of life (opened up through a lascivious outspoken patient in Otto Gross acted with the required florid panache by Vincent Cassel of Black Swan) has some bracingly dark, therapeutic quality into a rigorously psychological origin story.