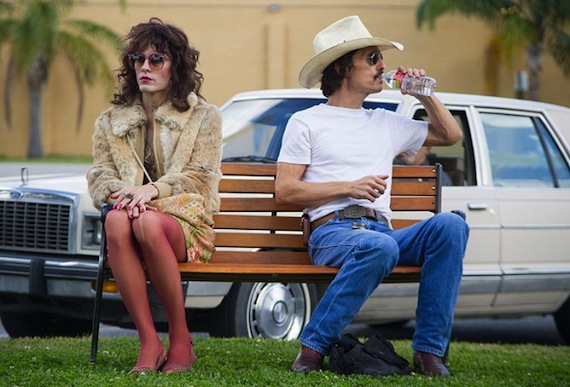 The very modestly budgeted Dallas Buyers Club is set in the mid 1980s with Texas electrician Ron Woodruff's hedonistic, high-living virile bigot turning crusader after being HIV-diagnosed with just a month to live when experimental drugs like AZT were arguably as deadly as the relatively new disease itself. It plays almost as a heist picture in subverting the traditional AIDS narrative without much exposition especially in the context of Big Pharma and the FDA which a daring Woodruff takes on while establishing the titular group.

Jennifer Garner is decent, but maybe doesn't have a more well-rounded supporting part as Dr. Eve Saks who is in the treatment of Woodruff and comes around to accepting his manner to circumvent the bureaucracy. Better is Griffin Dunne as an unlicensed doctor across the border whom Woodruff consults and more so Jared Leto in a strong comeback role as Rayon  who becomes Ron's unlikely partner with a contemptible brother of a cop (Steve Zahn, who worked with McConaughey in Sahara).

This creditable Club gets better as it goes along, in terms of pacing and involvement as Woodruff's transition becomes all the more urgent. The approach of Vallee in conveying the passion of such  emaciated  (both lost over 30 lbs. to meet the rigors of their parts) characters as McConaughey's physical transformation and Leto (maybe the best he's been since the memorable Requiem For A Dream) too offer quite a memorable cinematic experience.

Clearly, a rejuvenated or reinvented McConaughey (since Fool's Gold) has really honed his craft in the last few years from The Lincoln Lawyer and Bernie as well as Magic Mike, to this year's affecting Mud (a cinematic ode to Mark Twain) with this highly persuasive portrait of a charismatic redneck rascal who "dares to live." It's really hard not to buy into this fact-based Dallas crowd pleaser that certainly deserves the awards attention it's destined to get.