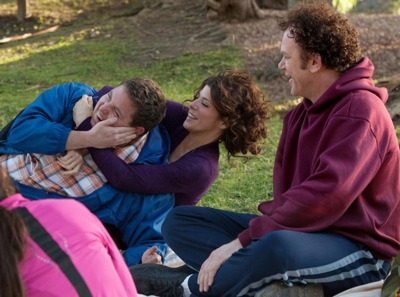 
Independent "mumblecore" filmmakers Jay and Mark Duplass have made an intimate, arguably slight, but intermittently darkly funny picture with their third feature, Cyrus.

They has a fine small ensemble with recognizable celebrities like John C. Reilly, Marisa Tomei, Jonah Hill and Catherine Keener who are usually relegated to secondary status.

The Duplasses are able to do something a little maverick and meaningful with what could have come across in more strident humorous strokes.

Reilly's character could be a relative of the one he played in The Good Girl, a deft low-budgeter which highlighted the thespian gifts of such a big star like Jennifer Aniston.

Here, Reilly's Los Angeles-dwelling John has been in a rut for awhile since being divorced from Jamie (Keener, good in the wry Please Give). Her news of remarriage to fiance Tim (Matt Walsh) prompts him into a bit of inebriated embarrassment but out of his social reticience, leading to Molly (Tomei) noticing him while he's standing over some backyard bushes.

The attractive Molly is obviously wiser than Shrek to whom John refers himself as he can't believe she is drawn to him. Their interaction looks to have begins to have some purpose to it, but the titular presence of her peculiar 21-year-old musically-inclined son (Hill) who lives with her, really needing her company is more than a distraction and perplexes him as the relationship hits a plateau, for a while, anyway.

So, the filmmakers (who did well with the satirical Baghead) are able to fabricate some malleable, ad-lib-ish comedy as the main tension arises in the atypical, but gradually identifiable dynamic between a rather protective Cyrus, Molly, and John.

They reign in most of the low-budget production values and hand-held lensing to make something situationally amusing, but later more affecting and edgy than expected as a chess match of sorts develops. Tomei is probably a little short-shrifted, however, when it comes to the kind of role more deserving of her than something more typically mainstream like Wild Hogs. But, her effervescent, conflicted Molly definitely brings resonance to the intricacies of relationship when it comes to family and love.

But, with directing brothers like Ridley and Tony Scott as producers, her not-so-ingratiating portrait allows Reilly (Step Brothers, Cirque de Freak) and New-Age(y) Hill (currently good as the blotto in wild, if uneven road pic Judd Apatow produced Get Him to the Greek") to shine in ways to become more sympathetic than pathetic as their characters appear when first seen. Some may frown upon Cyrus as a bit skittish and self-conscious (with up-close shots, hand-held lensing and long-takes), but ends up in more of a humanistic comfort zone through its unsentimental, bumbling wit and honesty.