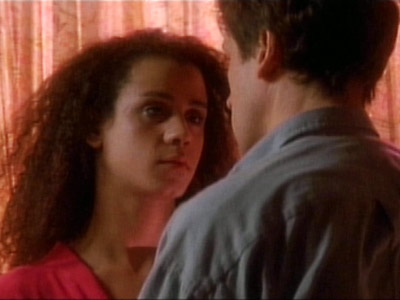 A small bank of IRA terrorists kidnap Jody, an English soldier (played by Forest Whitaker, who was so great in Good Morning Vietnam and does a wonderful job here with a realistic accent), who's stationed in Ireland. They want to trade him for an Irish prisoner whom the British are holding.

The only female in the group is Jude (Miranda Richardson, Damage) who goes about her business with chilling single mindedness. Fergus (Stephen Rea) who is in charge of watching Jody, is the most humane of the bunch, not really wanting to carry out what he's committed to do.

With his hands tied behind his back and a heavy hood covering his face, Jody expresses his fears, talking all night to Fergus; the two connecting as captive and captor in a strange, moving way.

Fergus disobeys orders and removes Jody's hood when he's hot, gives him food and a smoke and talks to him about Dil, Jody's girlfriend in London.

When it becomes apparent to Jody that the radicals will have to kill him, he asks Fergus to find Dill and tell her he was thinking of her at the end.

After the group's plans are thwarted, Fergus flees to London to seek out Dil (Jaye Davidson), who works as a hairdresser and hangs out at a nearby pub, where the two meet and begin a relationship.

With nominations in the Best Picture and Actor categories, and with Miranda Richardson who has been nominated for Damage, the picture is receiving a lot of attention. The film is overrated and certainly not "Best Picture" material. It's being touted as a thriller, but other than a surprise angle, the film runs its course without a plot twist in sight.

Besides being struck by the powerful acting, my thoughts went to the audience, some perhaps who venture out occasionally to the movies and chose this film because of all the publicity it's currently receiving. These sometime moviegoers are in for a shock and others will simply be let down.

Although The Crying Game is superbly acted and with diverse characters that are sensitive, violent, manipulative and human, it's definitely not for everyone.