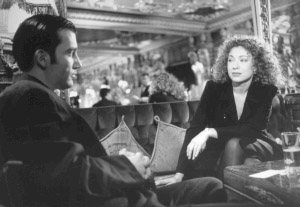 Being at a casino playing against the odds can have quite an effect on one's life.  The independent film Croupier successfully lures the viewer into the London casino world, as roulette and blackjack are the games of chance on view from the slick direction of Mike Hodges, whose Get Cater struck a cult following nearly three decades ago.

Because of its success in less than 20 cities after opening in April, the sly intimacy worked by Hodges with his star Olive Owen (Bent) in the lead role of jack Manfred, a writer lured back into the world of gambling by his father (Nicholas Ball), now plays in 100 venues and, like Ethan Hawke's Hamlet, may be more alluring than the current summer big budget fare.

Following the life of Jack's stagnant novelist as he narrates the movie in an introspective third person format makes Croupier more engrossing and revealing.  The characters and aura from an elegantly cozy London casino add to the tension of this snazzy, hip noir that feels like David Manet without his prose.

From South Africa, Jack's dad pulls strings to get him an interview.  Jack still knows the ins and  outs of dealing, being a croupier.  His live in girlfriend Marion, a store detective played with tenderness and frankness by Gina McKee, wants to marry a writer not a croupier.  Though she, in her personal and professional life, has also played against the odds; as jack notes that in his line of work all of the potential swindlers with their late bets are caught.

A run in with an expelled patron leads to passion with another dealer, Bella (Kate Hardie).  She eventually is unemployed from the casino, as Jack's life gets more complicated in a life that is full of temptation.

Adding to the intrigue is Jani, endowed with fervent gaming and physical attraction, by ER's Alex Kingston in a femme fatale pivotal part.

Hodge puts the chips in Croupier on the table that makes it as hard for the viewer, as the customers, not to leave the table, in spite of the dealer's chances when he utters "place your bets."  With the deftness of Jack's handling of the cards and chips, Owen's understated performance becomes all the more effective as the croupier soon gets an idea for the novel that has been eluding him.  And McKee, Hardie, and Kingston are captivating individually as Jack experiences the graduating conflict, as his conscience brings out inner regret.

Its last act isn't as taut as you would expect from the likes of Mamet.  Jack is a little astonished, like the onlooker, but the cool ambiguity of Owen and the atmosphere of Croupier emerges as a winner against a house of troubling games.