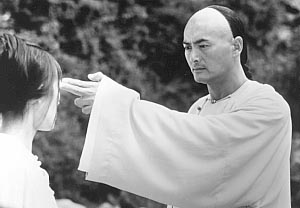 There is a graceful poetry in fierce motion in Ang Lee's masterful spectacle, Crouching Tiger, Hidden Dragon, a feminine slant on the martial arts.  Lee's first Asian film in five years, after The Ice Storm and Ride With The Devil, is arguably his finest, as he uses elements of The Matrix to affect brilliant action and effects as he weaves in a clever melodrama to lift an intriguing tale of revenge above all other films in this genre.

Not without the power of strong characters, Lee's Mandarin spoken picture could lure in The Matrix and the Charlie's Angels crowd.  They'll be in awe of the marvelous choreographer, Yuen Wo-Ping, who transcends his work in action pictures.  Chow Yun-Fat (Anna and the King) and Michelle Yeoh (Tomorrow Never Dies) headline the film that is richly backed up by Zhang Ziyi Cheng Pei-pei and Chang Chen.

As Green Destiny is nabbed from Shu Lien in Beijing, the first great action scene comes at night with Peter Pau's camera following the masked thief over moonlit rooftops with athleticism captured through wire stunt work in defiance of gravity.

Later, after it's clear that Jen and the shrewdly treacherous Jade Fox are a formidable twosome, Li tries to sway the headstrong girl.  Lee offers a deeper subtext for Jen in Chang's Lo, a desert bandit, in a romantic flashback set in Western China.

As the exhilaration intensifies to its mystical and tragic conclusion, Jen wields Green Destiny like a baton and Jade Fox has the same plans for Li as his master. Crouching Tiger, Hidden Dragon has a galvanizing notion of femininity which confronts the noble warrior and the disguised, sassy girl in a breathtaking battle atop branches of a bamboo forest.

By taking the viewer back to early 19th century China, Lee realizes his dream of making his martial arts film thrilling and heartfelt, with an unforeseen beauty, underscored by Yo-Yo Ma's cello.