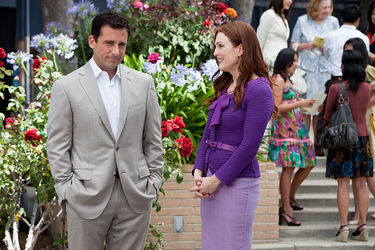 
This summer romantic comedy featuring a fine ensemble cast blends wry sophistication and coincidence, as alluring laughs win out over any potential gratuitousness.

A sensibly adult, if perhaps a bit improbable, script from Dan Fogelman recalls Love, Actually in the mindset of one single soulmate being out there for everyone.

Carell's Cal Weaver has his life turned upside down when his wife of twenty-five years, Emily (Moore) unexpectedly wants to end their marriage.

Cal relocates to a drab apartment feeling confused and disoriented, as his young teen (8th grade) son Robbie (Jonah Bobo) harbors feelings for the family's high-school babysitter Jessica (Analeigh Tipton) who has a strong crush of her own.

Gosling (who scored in the art house drama "Blue Valentine" with more brawn here) limns slick sensitivity to lothario Jacob Palmer finding come-on lines from sources like The Karate Kid and Dirty Dancing. Jacob works his aplomb on a socially and fashionably dysfunctional Cal who has success with a desperate, high-strung woman, acted with noticeable ardor by Tomei. Which leads to a spree of one-night stands.

Connected to Cal and Jacob are Kevin Bacon's colleague suitor of Emily who tries to warm up to Robbie and Stone's young attorney in Hannah who initially showed disapproval over the smitten stud. Her romantic life isn't what she was hoping for when her boss (pop star Josh Groban) makes an announcement at a swank dinner party.

Helmers Glenn Ficarra and John Requa (who made the gay dramedy I Love You, Phillip Morris) mostly use genre cliches to their advantage, opting for more of a sweetness when intimate exchanges could have veered into more tastelessness. The intersecting twists and coupling might catch some audiences off-guard when it comes to a parent-teacher conference or an attempt to win over parents. Suffice to say that Jessica and Hannah figure most prominently in them as one of the strands recalls the recent well-publicized incident of Anthony Weiner.

Even with some imbalance in its cleverness, more of a melancholic, low-key mood prevails in a consistently deft production with the music and lensing complementing the action without being intrusive or strident. It helps that Carell and Moore ably express the conflicts of Cal and Emily, with the former not just on hand for his comedy in a performance that locates some of the pathos that Moore is so adroit at delivering. Tipton shows maturity for her age in a pretty demanding part for a younger performer, while a busy Stone (Easy A,The Help) shows more range as an ambitious, desiring business woman.

Crazy, Stupid, Love. may not equal the true intent of its title, but in the hands of its capable filmmakers and talented actors is a creditably amusing and affecting roundelay, a cinematic well-couple dalliance right through Robbie's graduation.