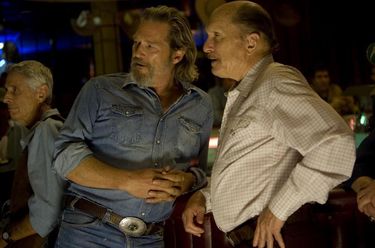 
Four-time Oscar-nominee Jeff Bridges should make it five as downtrodden, hard-living country musician "Bad" Blake in Scott Cooper's Crazy Heart. There's a resemblance to the kind of authenticity Mickey Rourke gave in last year's The Wrestler, but not really a comeback for a prolific actor who tickled the ivories well and Michelle Pfeiffer's heart in The Fabulous Baker Boys.

Cooper's unhurried debut croons its way into same-old-song redemptive territory with a terrific Bridges leading the way, along with co-stars Maggie Gyllenhaal, Colin Farrell, and Robert Duvall, also a producer.

The director and co-writer (once a two-time Major League Baseball All-Star with the Boston Red Sox) works admirably from the Thomas Cobb novel. He probably saw Duvall's winning, seminal Tender Mercies a time or two also.

Houston native and former star Bad is on the verge of new opportunities during some rough times as the shaggy-coiffed singing cowboy has crept well into middle age plagued by a life of addiction. It's been a lonely life on the road relegated to grungy bars and bowling alleys staying at motel after motel.

The lush of a troubadour gets an interview with local Santa Fe journalist Jean Craddock, done with sweet allure by Gyllenhaal (Sherrybaby, Secretary) who has a pre-school son Buddy. Their relationship develops and it helps him get back on track - at least for a while - with country's finest Tommy Sweet, done quite convincing by Farrell. And, Duvall lends a solid, laid-back presence as Wayne, a bartending and fishing buddy for Bad.

The seasoned pro in Bridges who wears all the good and more bad with charisma and a working-class polish doesn't really try to lord over the proceedings, but he does so in a way that deserves more than a tip of a cowboy hat. Though the self-destructive obnoxiousness been seen so often before, there's a rugged naturalism rooted in Americana which blossoms in ways that Cooper refines to virtuous effect.

The songs performed by Bridges (perhaps channeling a little Merle Haggard) and Farrell were written by Stephen Bruton and T Bone Burnett will more than agree with country music fans, especially "The Weary Kind" in a crisp production shot in widescreen. Bad's battle with his personal demons and struggles to produce new inspiring songs is one that unfolds with nostalgic, old-fashioned soulfulness.