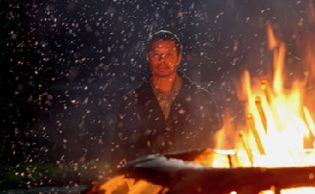 
This honest sprawling film by Paul Haggis (writer of Million Dollar Baby) is a personal reflection of being car jacked while coming out of an LA video store. Crash is not a polemic against racial intolerance as it deals with the rationalization of discrimination in daily life and boasts a talented multi-ethnic group of actors led by Sandra Bullock, Don Cheadle (also producer) and Matt Dillon. It may have some audience members looking more closely at themselves rather than being quick to judge.

The branching, intertwined short cuts of narrative are joined by race and class, but really are about a phobia of those not close to us. It builds a weighty emotional tone off of fear and prejudice and may remind some viewers of P.T. Anderson's Magnolia and Lawrence Kasdan's Grand Canyon in the way compassion can result from anger. Los Angeles itself is an important character in this cautionary tale where morality and humanity are in a fragile state as all people are protected, in a way, in their cars and behind the metal and glass in their homes.

The script co-written by Haggis (a veteran TV writer) and Bobby Moresco has Cheadle's Detective Graham Waters touching against most of the vignettes that often get somber, but finally cathartic.

Brendan Fraser (The Mummy) is D.A. Cabot who is married to a lonely, suspicious and paranoid Brentwood wife, Jean, well acted by Bullock. A car jacking by two black men, played by rapper/actor Chris "Ludacris" Bridges and Larenz Tate pulls them out of their complacency. The busy William Fichtner is assistant D.A. Flanagan who puts Waters in a tough situation when it comes to a case for the D.A. and his missing brother that his mother puts the onus on him to find.

There are two cops in this tale that takes place in 36 hours before Christmas who are very dissimilar. Dillon is the troubled, abusive Officer Ryan, devoted to his father and Ryan Phillippe is Officer Hansen, the guy you would want patrolling your neighborhood. Cheadle's Waters and police detective lover Ria (Jennifer Esposito) are investigating the car jacking of the Cabots and another crime which pits the two aforementioned white officers against a black couple television director (Terrence Howard) and his wife Christine (Thandie Newton) who has had a few drinks.

The last of these charged entanglements deals with a Persian small shop owner immigrant (Shaun Toub), taken for an Arab, and his family (Bahar Soomekh and Marina Sirtis) and a Latino locksmith (Michael Pena) who is the target of despair and unreleased anger. In a film that induces viewer reaction, a scene in front of the locksmith's house is the one that will draw the most audience reaction.

First time helmer Haggis brings much truth and energy to the individual scenes, most of which don't last very long. He works smoothly with his performers and Moresco to make the intersections emotionally resonant. There are two scenes of automobile "crashes" in Crash. A wry moment can turn in an instant to something more anxious and combustible that becomes more chilling and emotional in a post 9/11 environment, especially when they involve a white van and a statue.

Provocative and wrenching, Crash does not attempt to provide resolutions, letting us into the rather harsh details of individuals and society. Some may object that Haggis has pleated it all in a manipulative, too coincidental manner. But the sounds of silence from Cheadle, and grief of Bullock speaks volumes about how close everyone is to crashing when it comes to human weakness. And, with all the crisp lensing and editing, the complexities of strangers affecting one another hardly comes across with more insight than the encounters between a driven Dillon and a never-better, vulnerable Newton.