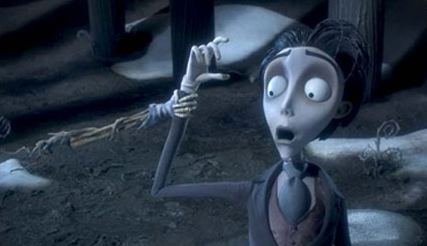 
Director Tim Burton with Michael Johnson has created poetic, graceful characters for Corpse Bride, no matter what activity they are engaged in, even when cutting fish their presence has a smooth graceful flow.

In an opening scene that sounds like a Gilbert and Sullivan operetta the parents of Victor (Johnny Depp) and Victoria (Emily Watson) sing of their motivations for the arranged marriage of their children.

The two fall in love as they meet while Victor plays on a piano in his future in-laws great hall, the piano is a Harryhausen (perhaps a tribute to the great Ray Harryhausen). But the wedding rehearsal is as bad for Victor as it was for Ben Stiller in Meet the Parents. Here he sets his future mother-in-laws dress on fire from a symbolic wedding candle.

To clear his head, Victor takes a walk in the woods and while practicing his wedding lines, drops the wedding ring as he says I do and suddenly finds himself married to the Corpse Bride.

Even as Victor descends into the underground world of the dead this film is beautiful to watch. He is greeted by singing skeletons who tell the Corpse Bride's sad tale in New Orleans jazz style. The underworld is filled with surprises from a childhood dog to a spell maker that reminds us of Lionel Barrymore with spectacles. The conscience the bride is a little maggot who sounds like Peter Lorre, that keeps peaking out of her right eye.

With an out of control town crier embarrassing the family Victoria's family looks for another husband for their daughter as Emily the Corpse Bride admits her sadness to split skeletons, crows, dogs and friendly spiders.

It's impressive that the Corpse Bride who only retains bone structure has a sense of beauty about her while Victor looks innocent and youthful as he anxiously attempts to be unmarried and available for Victoria.

The dead walk the surface after the spiders do the work mice completed for Cinderella and the only hope for the lovers comes when the butterflies are free.

The Corpse Bride is a wondrous, beautiful piece of art.