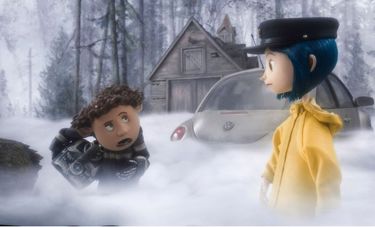 
Henry Selick adapts Neil Gaiman's book to create something a little dark, yet highly delightful for kids and adults alike. Although the last act may be a little too much for small fry.

The animated stop-motion Coraline (ideally viewed in Stereoscopic 3D) has a moody, dream-like aura to it that fascinates with subtly deft filmmaking and storytelling.

Featuring the voices of Dakota Fanning, Teri Hatcher, Keith David and Ian McShane, this tale of a lively, bright girl connects in an off-center, sweet way just like her name.

Coraline (Fanning, also in the psychic action/thriller Push) is being neglected by her parents (Hatcher and John Hodgman) who are busy writing their latest gardening book, though they hate to be outdoors. They've moved the family to the Pacific Northwest in a part of a faraway antiquated domicile.

In Selick's story, the pensive, yet earnest girl has a friend in the odd, if nice Wybie Lovat (Robert Bailey, Jr.). In the other parts of her home, Coraline interacts with aging ladies (Jennifer Saunders and Dawn French) who were once part of a risque vaudeville act, in the cellar. And, upstairs is the circus acrobat Mr. Bobinsky (McShane of Death Race) who's in the process of training mice for his latest act.

Wybie discloses the fact that his grandma's sister went missing while she was a kid in the same place Coraline now lives. It doesn't stop her from unwittingly passing through a papered, locked little door in her room that leads her into a new reality where attentive, loving versions of her parents greet her. In this alternative, somewhat sinister world, eyes are replaced with buttons and if Coraline wants to remain in this mirror realm she'd have to agree to sew buttons over her eyes.

Selick lets the latter sections unfold tautly with some peril as Coraline enlists the help of Wybie's mysterious cat (David) to deal with her own fate and spirits of other wrong-minded children against the deceptively kind Other Mother (also Hatcher).

The template here may have been "Alice in Wonderland", but it exudes its own brazen individuality and wit, like the title character, able to ingratiate in a strange, often creative way that combines the vintage with state-of-the-art when it comes to the various crew departments, especially in visual effects and stop-motion animation.

Lyrical and macabre, Coraline benefits from the expressive vocal work of its cast, especially Fanning, David, and Hatcher as it embraces the more ominous edges of family values. This mischievously touching treat that easily can stand together with Selick's James and the Giant Peach and (the Tim Burton-produced) The Nightmare Before Christmas also has the influence of The Wizard of Oz and Burton's cheekily audacious Beetlejuice. It's a fable that consistently resonates with many vibrant images that reach out from the screen where best seen, even through the closing credit scroll.