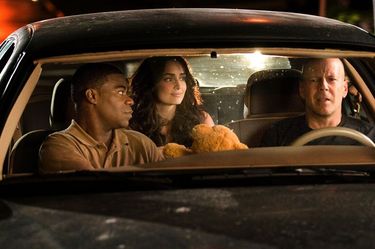 
This new buddy comedy is blandly mediocre, living down to its title, which was to be "A Couple of Dicks".

Cop Out stars Bruce Willis (Surrogates) and Tracy Morgan (TV's "30 Rock") and the latter gets most of the "laughs" in something churningly cheesy that has '80s cop films like 48 Hours and Lethal Weapon on its mind.

Early on the film displays its lackadaisical, mugging nature when Morgan's Paul, NYPD colleague of Willis's Jimmy (for nine years), showcases a homage through impressions of movies which director Kevin Smith loves during an interrogation of a suspect.

Not long afterwards in this rambling, more gratuitous than funny seemingly improvised escapade, these unlikely partners have to turn over their guns and badges after a stakeout goes awry.

But, when Jimmy's mint 1952 Topps baseball card is lifted (one intended to finance the wedding his daughter (Michelle Trachtenberg) wants), they're on the prowl of a memorabilia-obsessed Mexican drug dealer (Guillermo Diaz). He uses his batting cage against those on his bad side and enlists the cops to recoup his Mercedes inside which is the mistress (Ana de la Reguera) of an enemy.

It would appear that besides spoofing the genre, a lackluster Smith matches the ham-fisted quality of the script by Mark and Robb Cullen. The mistress says "Hi" a lot to Paul as the usually amusing Morgan doesn't seem too happy with how the jokes play out, one of which has him dressed up as a cell phone. It's a case of giving this kind of talented comedian more lines than he really needs, especially opposite the Spanish damsel-in-distress.

Moreover, there's the moonlighting Paul thinking the worst of his wife with his neighbor "watching" her with a stuffed bear as Jimmy doesn't want to give his daughter away along with his ex-wife's snooty new husband (Jason Lee, whose appeared in many a Smith picture).

From an execution in a church through Seann William Scott's antics as a wacky, addled crook (kind of like Joe Pesci at times with Mel Gibson and Danny Glover) during which a homeowner takes matters into her own hands comes on as a small-time cinematic drone. One that lacks the kind of chemistry that made something like Running Scared better than it was and that has the synthesized score of a Beverly Hills Cop. Smith's arrested development knockoff miserably extends into the final credit scrawl to the morgue for those who want another cute knock-knock joke.