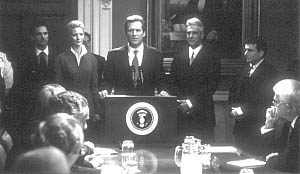 In a world which thrives on power and revenge Senator Laine Hanson (Joan Allen) is nominated to fill the vacant position of Vice President, under President Jackson Evans (Jeff Bridges).

As we watch the movements of power in Congress and disloyal presidential advisors who favor Governor Jack Hathaway (William Peterson) for the position, it becomes obvious that revenge and idealism meld together in the Judiciary Committee Chairman, balding Congressman Shelly Runyon, played with amazing reality by Gary Oldman.

The story tricks and twists as it moves toward a climax, beginning with the opening scene in which a small red car crashes into a river next to a boat which Governor Hathaway is fishing from.  The cascading ride toward nomination and confirmation with a heroic effort by the Governor to save the drowning driver thrusts us  immediately into the process and dark intrigue.

Senator Hanson, a former Republican who switched party even though her father is a prominent Republican former Governor, holds very liberal values and it would appear from research Chairman Runyon possesses that she practices a very liberal sex life as well.  Runyon appears fixated on photos of the contender when she was eighteen and a college freshman.  The confirmation hearings revolve around sex and abortion, but are motivated by Runyon's determination to gain revenge for past political defeats by President Evans.

Oldman has the most powerful role, a driven man who has given up everything for his work but hasn't learned that revenge can bite back.  He is challenged by a slick President who knows enough to give a sandwich to a young Congressman (Christian Slater) so that he can make points while the young man has a mouth full of shark steak.  The Chief of Staff played with public dignity and private fury by Sam Elliott, knows how to use the tools of the Federal Government to hand the President a key to unravel the secrets and challenge Runyon.

The seasoned President makes practical decisions.  In contrast, the contender will not talk about her sex life as a matter of principle, even if it means defeat.

Nicely cast and well directed by Rod Lurie, The Contender is a rich, tense and exciting drama.  It demands attention as the twists keep us guessing and allow our imagination to dream the best and worst of these political leaders.