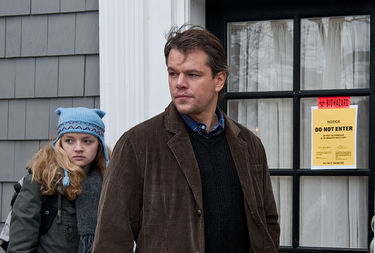 
Steven Soderbergh's new biological medical potboiler with an all-star cast may remind some filmgoers of Outbreak or 28 Days Later crossed with his more trenchant, headline-ripping Traffic. It sporadically works off of fear and survival but just doesn't have enough to be more than a corollary of chilling, cautionary cinema from a lackluster out-of-order multi-strand tale.

Still, Contagion (best viewed on IMAX or giant screen formats) has a fragmented, edgy, documentary-like realism with the director again doing double duty under his nom de plume, Peter Andrews. He again gets craft contributions from those like Louise Frogley, his wardrobe designer, and Cliff Martinez who offers some sharp synthetic rhythms.

Soderbergh and his screenwriter Scott Z. Burns (The Informant) have arguably expertly envisioned a viable global pandemic identified with pathogen transmission similar to strands in avian flu, swine flu, SARS, and the lesser known Nipah virus which ravaged Malaysia, specifically its farming communities, in the late 1990s. The actors don't probably have the chance to make the same impact as a lethal virus of this ilk can, as some of the ensemble are more persuasive than others.

The international hopscotching may remind some of Clint Eastwood's Hereafter as on Day #2 Gwyneth Paltrow's philandering businesswoman Beth Emhoff has come home to Minneapolis from Hong Kong for Thanksgiving and has some refreshments at the airport bar. Just a couple of days later after being jet-lagged with flu-like symptoms she ends up at the ER as her husband Thomas (Matt Damon, star of that aforementioned recent satirical Soderbergh film penned by Burns) can't get his bearings at first when told of the news by doctors.

Something mysterious and alarming poses an international threat all the way from Chicago to London, Paris, and Tokyo. So, there is much pressure for one like the CDC Deputy Director Dr. Cheever (Laurence Fishburne of TV's CSI). Kate Winslet's Dr. Erin Mears is the first-responder "detective" on a precarious mission and  Dr. Ally Hextall (Jennifer Ehle) is the medical researcher trying to come up with a vaccine.

Also, in the scenario where it is imperative not to touch or talk or be closer to anyone, Dr. Leonora Orantes (Marion Cotillard) of the World Health Organization feverishly tries to locate the virus's Asian antecedent. Jude Law (whose breakout role awhile back was in film with Damon and Paltrow, The Talented Mr. Ripley), maybe channels his Road To Peredition photographer part as government-antagonizing successful blogger Alan Krumwiede. The sensationalistic tooth-decaying fellow mentions of possible relief of the herbal variety, Forsythia.

The complexities within the scientific community have some of the characters ennobled by the threat, not as depicted in earlier representatives of the genre. Some may recall The Andromeda Strain for example, but obviously to fill its need there has to be fulfillment from it as strange coughing, high fever, unexplained seizures and brain hemorrhaging become rampant.

Though the narrative doesn't seem to run at the same level as the filmmaking, some suspense is felt as Day #1 finally provides clarity. Damon proves reliable again as in The Adjustment Bureau and when he was a numbed clairvoyant in Hereafter - here as a determined working-class dad out to protect his daughter. As for the mostly truncated roles, it's Winslet and Ehle, the latter figuring in some moral ambiguity, who provide the strongest characterizations in an understatedly febrile but not that scary rewinding Contagion.