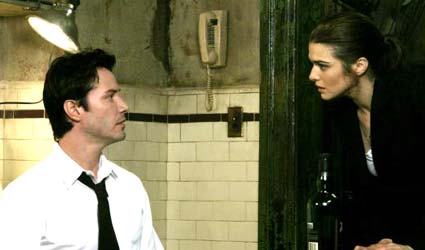 Post Matrix life for Keanu Reeves includes the adaptation of the DC Comics/Vertigo Hellblazer graphic novel Constantine. It’s a moody horror/science-fiction action piece that feels and looks similar to the latter part of his paring with Al Pacino in The Devil’s Advocate.

Reeves plays noticeably well, if melancholic, off of his dark-clad Neo character under some imaginative direction by music-video helmer Francis Lawrence. The story and characters mainly sag under the visual effects, makeup and cinematography, but the dark mythology fits into a hellish underbelly found on Earth.

His John Constantine is a tormented demonology expert in Los Angeles seeing the “half-breeds” who work on behalf of their commanders from an otherworldly place, doing his intervening best to maintain a balance between heaven and hell. He’s working on another exorcism of a young girl for beleaguered Father Hennessy (Pruitt Taylor Vince).

Writers Kevin Brodbin and Frank Cappello have the anti-hero not too far from death because of chain-smoking himself into terminal lung cancer. And he’s had to be less than ingratiating in deporting wicked half-breeds down to Hades. Will this effort give him a chance to reach heaven?

A snag in his plans comes from a competent, but skeptical police detective, stoically acted by Rachel Weisz, who last time with Reeves was in Chain Reaction. It seems that her deeply disturbed twin sister, Isabel, committed suicide. The actress endows the desperate woman with allure in mind (Psychic) and body as she embarks on a treacherous journey from her apartment with Constantine’s help.

There are some interesting, if underdeveloped (in some cases) characters like Gavin Rossdale’s engagingly vile Balthazar, Shia LaBoeuf’s youthfully relaxed driver and protege Chaz, as well as the neutral Midnite, a former witch doctor and faith healer played by Djimon Hounsou (In America). His nightclub is an asylum for half-breeds as he tells Constantine of the need to preserve the balance and loyalties on both sides.

There’s also a white-clad Satan (Peter Stomare) and an androgynous gatekeeper for heaven, Tilda Swinton’s Gabriel and Vermin Man, a demon human who disintegrates repellingly into roaches, scorpions and snakes. The makeup, creature effects (from Stan Winston Studios) and costuming by Louise Frogley adds a variety of apparels which create a sleek, classic look of a lean film noir.

The production designs by Naomi Shohan and lensing by Philippe Rousselot (of the upcoming Charlie & The Chocolate Factory) complement the attention to make heaven and hell exist as parallel dimensions with heavy hues of orange and green. A cold, cataclysmic landscape is created in downtown LA where Constantine’s convolution progresses with low-lighted stunts and battles as a powerful holy shotgun makes a bitterly jaded Reeves out to be much more than a ghostbuster.