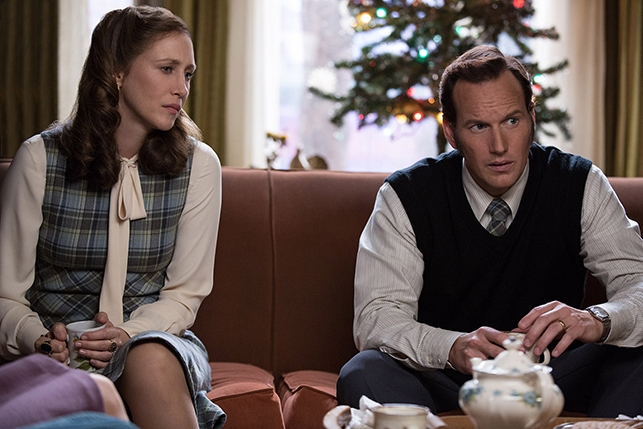 
James Wan has developed an efficiency behind the camera with horror tropes, yet struggles to coalesce them with a focused, hardly streamlined narrative devised with three collaborators in this occasionally eerie, though prolonged supernatural sequel.

The Conjuring 2 still is rather macabrely simmering in a way that gives resonance to mutually supportive demon-confronting married couple Ed (Patrick Wilson) and Lorraine Warren (Vera Farmiga, who's flourished of late on the small-screen Bates Motel). A pre-credit sequence involves the mid 1970s New York case that really made a name for themselves which has Lorraine (who has dire visions of her husband) wanting to leave the profession after stepping into some scary shoes in which the unpleasant etiolation of a nun appears (which may resemble Marilyn Manson to some).

But, the needs of their apostolic allies have them on a new 1977 challenge in the North (working-class borough) London area of Enfield where the Hodgson family (single mom of four Peggy, a petrified yet very protective Frances O'Connor of The Missing and A.I.) is plagued by wraiths, not to mention a scabrous elderly specter. There is a presumptive copacetic, fretful titillation on the ominous horizon from this nefariously notorious (at least for the locals) incident. Instead, the way the paranormal activity unwinds around steadfast spousal crucibles isn't the kind of revelatory sharply examination of an actual haunting which might have been assumed from the more recent trailers. Even when it comes to how the antagonists are portrayed.

If the actors are left in a tremulous, tattered state it's not because Wan can coax some intensity and even levity at times from them. Farmiga and O'Connor have an effective defense familial mechanism inherent in their characters, even if the former's Bible thumping can be a tad discommodious. Wilson balances it out with some light-hearted pragmatism, and appearances by Franka Potente, David Thewlis, Maria Doyle Kennedy and Simon McBurney add an international flavor to some decent authentic period trappings (The Clash is heard on the soundtrack as well as other memorabilia) allotted by the filmmakers. Madison Wolfe of Joy is prominently potent and reminiscent of Linda Blair at times as youngest teleporting Hodgson daughter Janet.

If the overall chestnut is more hazy than intended, the contributions from the director's craftspeople are hardly wan (no pun intended). Especially in Julie Berghoff's crisply dank production designs to accentuate the disturbing corners awaiting the tormented. Don Burgess (Spider-Man, Forrest Gump) provides perfidious wide-screen cinematography to educe a frightening mood. With stealthy long shots and whip-pans amidst jolts of hysteria, the maliciousness around the spirited and spiritual doesn't rattle and clatter with the same agonizing cunning and clarity of its precursor.